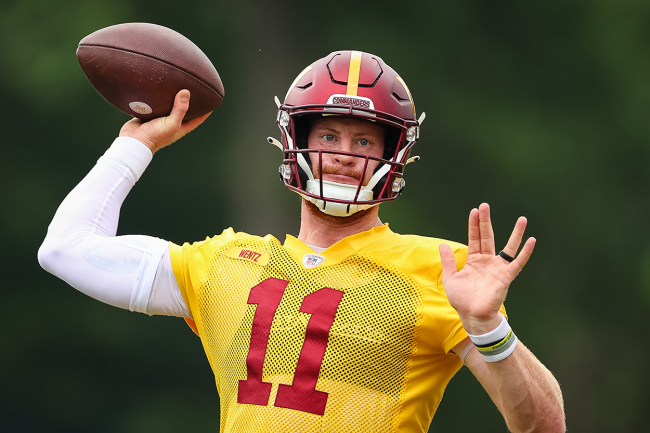 One of the biggest moves of a chaotic NFL offseason came between Washington and Indianapolis. The latter traded quarterback Carson Wentz to the former, which hopes to have found its signal-caller for the foreseeable future.

So far, Wentz’s NFL career has been extremely up-and-down. He technically won a Super Bowl with the Eagles, but did not see the field after Week 14 with a season-ending knee injury, and did not make it past the divisional round in his next two seasons.

While there were some positive, hopeful moments, there were also some really, really terrible moments.

And then he was traded to the Colts, where he was unable to lead them to the playoffs in 2021. Wentz was not great.

Carson Wentz has thrown interceptions in back to back weeks that has made the Sickos Committee just stand up and applaud. Yes ha hahaha YES!!! pic.twitter.com/7sBkLkS6Q2

Now he is on his third team in three years.

Washington has not won more than 9 games since 2012, when it lost in the Wild Card round and has not sniffed a Super Bowl since it won in 1991. The hope is that Wentz will be the missing piece behind/under center to help the Commanders get back to the promised land— or, at least, the playoffs.

Of course, based on his recent seasons, there is a lot of doubt.

None of the Carson Wentz hate it is coming from head coach Ron Rivera, who recently spoke highly of his new quarterback and provided a very positive outlook.

“I think probably the biggest thing watching Carson is how he got acclimated to us. How he got more and more comfortable being around our guys, getting to know some of our guys, developing some rapport with some of our receivers, picking up our offensive scheme for the most part.”

“Sometimes you really see the confidence in the things that he does very well and you can see that confidence spreading to everybody else around him. So that was probably the biggest thing, really, to me, was watching how he kind of fit in and was getting acclimated.”

Will Wentz be the answer? Only time will tell, but Rivera seems to think so.