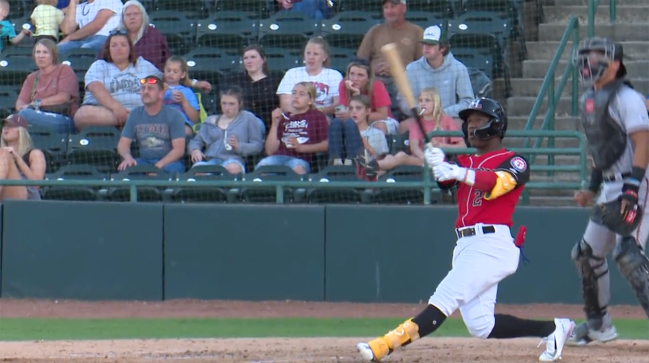 Luisangel Acuña might be the little brother of MLB superstar Ronald Acuña Jr., but he is carving his own path to The Bigs. The 20-year-old shortstop began his first season on the High-A level this spring and hit his first home run of the year on Wednesday night.

Acuña is currently a top-30 prospect in the Texas Rangers organization and has a lot of hype that comes with him. Not just because of his name, but because he is also remarkably athletic.

Over the course of his three-year minor league career thus far, he is hitting .291 with 108 RBIs, 15 home runs and 61 stolen bases in 167 games. Although he is still developing, he has all of the right tools to keep progressing through the system.

In particular, his swing is nearly identical to that of his big brother.

Acuña made his first start of the season on the High-A level last night for the Hickory Crawdads, one of the best team names in baseball. If you are unfamiliar with a “Crawdad,” it is more commonly known as a Crawfish— a small, lobster-esque crustacean that is boiled, seasoned and devoured by the pound. They’re delicious.

Hickory, a small town of about 40,000 in west North Carolina, adopted the name because of the heavy presence of Crawfish in local waterways. It’s awesome.

Anyway, back to Acuña. He hit a dinger on Wednesday— his first of the year. Before you watch Luisangel get ahold of a pitch and batflip his way down the first base line, take a look at Ronald’s swing:

Nearly identical. If the little Acuña can start to find more consistency at the dish, he could quickly find himself playing alongside his brother.