Twitter Had Jokes About Ronda Rousey’s Eccentric Eye Makeup At SummerSlam, Compared Her To ‘Nightman’ 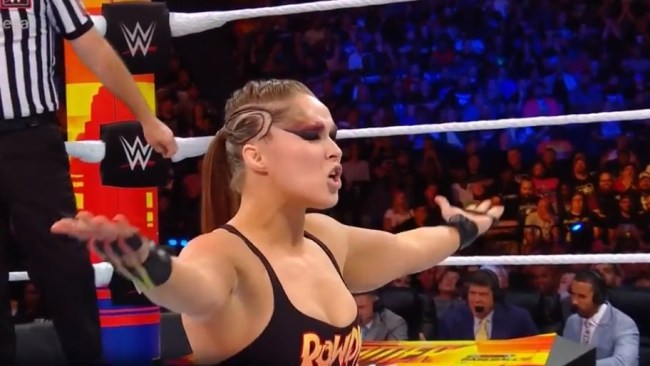 Ronda Rousey channeled her inner dark side for her SummerSlam 2018 match against Alexa Bliss. The former UFC champion was dressed in all black and went a little too extra with the eye makeup.

Before the massive wrestling event, Rousey was seen backstage getting mentally prepared for her match.

Rousey’s over-the-top eyeshadow ignited numerous jokes and hilarious comparisons such as the similarities to Mac’s “Nightman” character from It’s Always Sunny in Philadelphia.

Ronda Rousey: Do you remember when Always Sunny in Philadelphia did the Dayman musical?

Rhonda is the Nightman pic.twitter.com/KkBSDbIVzR

Ronda Rousey about to take on the Dayman #Summerslam #WWE pic.twitter.com/lYf7zYLEBX

There were also comparisons to raccoons, the 2010 movie Black Swan with Natalie Portman, comic book characters, and fellow wrestler Mantaur.

Not sure if Ronda Rousey or The Coon from South Park…#SummerSlam pic.twitter.com/Kg649bKbOd

Ronda Rousey and Proxima Midnight must have the same makeup artist. #SummerSlam2018 pic.twitter.com/OfoAEy0MwU

When I saw Rousey sitting backstage at #SummerSlam tonight with her heavy eye makeup, I immediately thought of The Phantom. pic.twitter.com/blKBWXwL3W

Despite the gallons on eye makeup on her face, Rousey was able to not only see Alexa Bliss, but she also defeated her. Rousey of course tossed in her signature armbar to incapacitate Alexa Bliss.

Rousey won the RAW Women’s Championship and hopefully she doesn’t cry tears of joy because she could potentially unleash an oil slick on the Barclays Center and all of Brooklyn.