Ronda Rousey Destroyed The Bella Twins In An Epic Rant On RAW: ‘You Leeched Off Of The Names Of Your Men’ 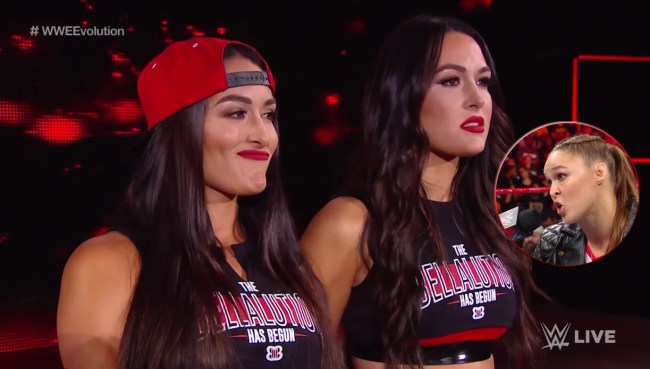 First off, let’s get one thing out of the way. Professional wrestling is a TV show. 99.9 percent of the time what wrestlers say and do has been pre-determined. Okay? With that out of the way, what Ronda Rousey said to the Bella twins, Nikki and Brie during WWE’s RAW on Monday night was pretty freaking awesome.

This was followed up by an interview Rousey did with TMZ where she called the Bellas “untrustworthy bitches” – a statement she reiterated on Instagram.

Nikki Bella responded to Rousey with her own Instagram post listing all of her accomplishment both in and out of a WWE ring.

In response to your post @rondarousey You may think I’m a “DNB” but that’s because you been here for what maybe 20 RAW’s? I’ve been here for almost 12 years. Since day one I have wanted change for the women at WWE. This “DNB” has been in the ring with Victoria, Natalya, Krissy Vaine, Shantelle Malawski, Taryn Terrell, Brooke Adams, Michelle McCool, Layla, Vickie Guerrero, Melina, Mickie James, Maria, Katie Lea, Jillian Hall, Maryse, Alicia Fox, Gail Kim, Candice Michelle, Beth Phoenix, Rosa Mendes, Eve Torres, Kelly Kelly, Awesome Kong, Naomi, Cameron, Eva Marie, Jojo, Summer Rae, Kaitlyn, Tamina, AJ Lee, Paige, Emma, Charlotte, Sasha Banks, Becky Lynch, Carmella, Alexa Bliss, Asuka, Riott Squad and more. I defended a championship for 301 days. I have executive produced and starred in two reality shows, one about women’s wrestling, while on the road wrestling. I even broke my neck for this business. So if you want to talk about a “DNB” look at yourself, because in this Evolution of women’s wrestling, you’re the “DNB” #bellalution #evolution video edit by @xoxocharlotteflairxoxo

And so, on Monday night, when the three women faced off, the bad blood was obvious. However, despite Nikki’s “12 years” in the business, Rousey took home the W with a scathing promo.

After some relatively tame back and forth, Rousey decided to “go there.”

“You leeched off of the names of your men,” said Rousey. “You plagiarize and dilute their movesets. You’re not pioneers.”

This is not completely untrue, as anyone who has watched WWE over the past decade can attest, though they have come a long way since they signed up for the 2006 Diva Search. (Not nearly far enough, however, if you ask other WWE wrestlers like Liv Morgan who Brie knocked out cold by accident recently.)

“We have broken more barriers that you ever have,” Nikki responded. “We have knocked down more doors. You don’t even compare to us… at all.”

That burn was made even worse by the fact that Nikki recently said that she “can’t say his name, legally, anymore.”

Looks like Ronda Rousey is beginning to get the hang of this whole wrestling thing.