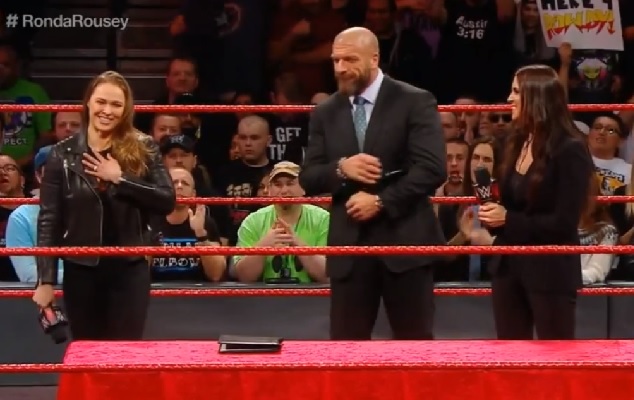 Last month, Ronda Rousey spoke with ESPN’s Ramona Shelburne and told her how happy she felt to be in the WWE after enduring many stressful years in the UFC.

As a UFC fighter, these naps became sacred to Rousey. Anyone who’d interrupt wasn’t just asked to leave the dressing room, but they were also snarled at, cussed out or thrown out. That’s how tense it was before her fights. That’s how much pressure she felt, not just to win but also to carry the mantle for women in combat sports, and maybe everywhere.

“Thinking back on it now — every single title fight that I won, I cried myself to sleep that night. Every single one,” she said.

“I don’t think that trying to make as much money as possible every single day is the best thing for my happiness. I want to wrestle, and I want to be part of this company, and I want the people that love this sport to accept me and respect me as being part of the sport. I know that’ll take time, but I also know that I’m capable of anything.”

During tonight’s WWE Elimination Chamber you could see how truly happy Rousey was as she got emotional when the crowd began chanting her name.

Eventually Ronda got down to business and got into it with Triple H and Stephanie McMahon in the ring.

Ronda’s first match in the ring is going to be at Wrestlemania in April and it’s pretty hard not to root for to succeed in the WWE.