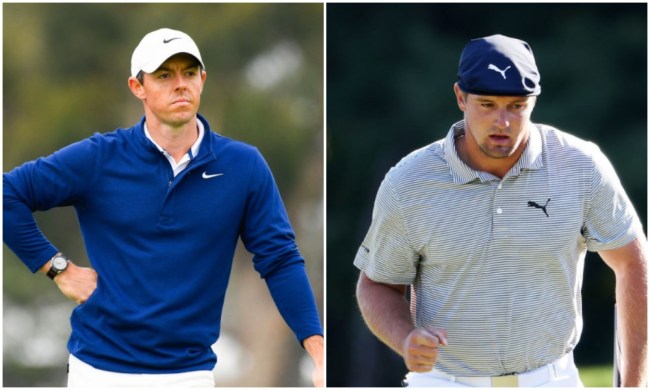 Bryson DeChambeau delivered a message to all of his doubters and haters on Sunday by winning the U.S. Open, his first career major. Not only did he win on one of the toughest setup golf courses on the planet, but he made it look easy with a gameplan that most thought had no chance of working, including Rory McIlroy.

DeChambeau’s gameplan was the complete opposite of every other players’ in the field, and quite frankly the opposite of what the USGA is after at U.S. Opens. He decided to shorten the golf course and stick to his new-found, extreme bomb and gauge playing style and forget about the treacherous rough at Winged Foot.

DeChambeau won by six shots and was the only player on Sunday to shoot under par. He did all of that by hitting just 23 of 56 fairways for the week, the fewest of any U.S. Open winner since 1981.

He hit only four of his final 21 fairways and after DeChambeau lifted the trophy, McIlroy was asked what he would have said if he were told before the tournament that the winner would have hit less than 50% of his fairways for the week.

“No chance. No chance,” McIlroy said, according to the NY Post. “I don’t really know what to say because that’s just the complete opposite of what you think a US Open champion does. Look, he’s found a way to do it. Whether that’s good or bad for the game, I don’t know, but it’s just — it’s not the way I saw this golf course being played or this tournament being played. It’s kind of hard to really wrap my head around it.”

McIlroy certainly isn’t alone in thinking that a player hitting half their fairways during the week would have no chance at winning the U.S. Open, but his comment about him not knowing whether it’s “good or bad for the game” is interesting.

McIlroy is one of the longest hitters on the planet and has been for years, he and plenty of other bombers have ‘changed the game’ so to speak, but DeChambeau has simply taken it a step further. The technology is the same for everyone, only DeChambeau hopped in the gym and put on 30+ pounds to pick up more ball and swing speed than any other player on Tour.

The four-time major winner, who is always candid and honest with the media, went on to explain that DeChambeau has simply taken advantage of “where the game is at the minute.”

I sort of said, ‘OK, wait until he gets to a proper golf course, he’ll have to rein it back in,” McIlroy said. “This is as proper as they come, and look what’s happened. Yeah, he’s got full belief in what he’s doing, and it’s pretty impressive… So I think … about the guy, I think it’s brilliant, but I think he’s taken advantage of where the game is at the minute.

“Look, again, whether that’s good or bad, but it’s just the way it is. With the way he approaches it, with the arm-lock putting, with everything, it’s just where the game’s at right now.”

McIlroy, like plenty of others in the golf world, sounds like a guy that simply doesn’t have an answer to how to ‘fix’ the game.

You either fall on two sides of the debate right now, either you think there is a distance and tech problem in golf or you don’t. That debate doesn’t *really* matter right now, however, it may in the future, but right now it doesn’t look like anything is changing in the immediate future. As McIlroy said, DeChambeau is taking advantage of where the game is at right now, which is something nobody can fault him for.