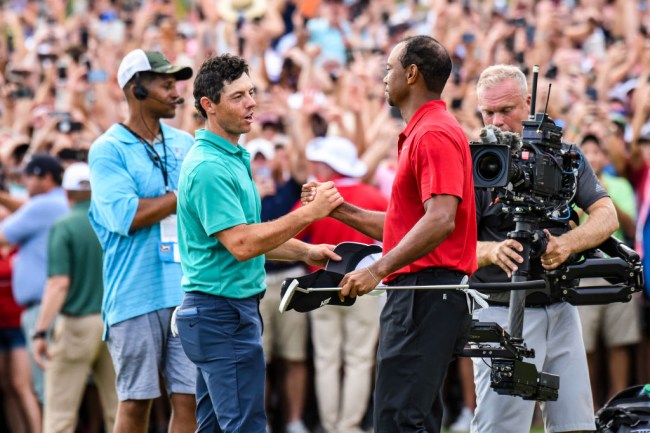 Rory McIlroy is fantastic with the media. Not only is he one of the most honest and thought-out interviews in the game of golf, he’s right up there with some of the biggest names in sports.

Paul Kimmage of The Independent got a chance to sit down with McIlroy recently for an unfiltered, no question is off-limits discussion where the four-time major winner has opened up about a number of topics. One of the more interesting discussions the two had was centered around Tiger Woods.

McIlroy has had his fair share of battles with Woods and like the rest of the golfing world, Woods has gotten the best of him a number of times.

It’s easy to forget due to the movie-like feel during Woods’ win at the 2018 Tour Championship, but McIlroy had the best seat in the house as he was paired with Woods that Sunday. McIlroy started the day three shots behind Woods – a player he looked up to growing up –  before stumbling into the clubhouse posting a 4-over 74. Woods went on to win the event by two shots after firing a 71.

Fast-forward to March of 2019 and McIlroy found himself playing with Woods again, only this time it was different seeing as how it was the first time he’d played him in a match play setting. McIlroy and Woods squared off in the quarterfinals of the WGC Match Play, and like on Sunday at the Tour Championship, Woods came out on top.

It was tough on McIlroy, so tough he didn’t even talk to the media after his loss.

“Yeah, it was a big day for me after (what happened at) the Tour Championship. I played better and hung in there for the most part, and was making a bit of a comeback until (the mess at) 16 and that killed it. But yeah, I would say Tiger has a bit more ‘frog’ in him than before, but the majority is still scorpion, whereas I’m probably . . . I’ve got some scorpion in me when I need to but my natural tendency is to be the frog.

But I was angry after that. I didn’t talk to the press.”

Next up is the 2019 Masters, which was far from a good week for McIlroy. He was beyond out of contention come Sunday sitting at 1-under for the tournament and yet again it was the Woods show as we all can remember the epic battle he and Francesco Molinari had down the stretch before Woods won his fifth green jacket.

With McIlroy teeing off so early on that Sunday he was just like the rest of us watching the final stretch on TV, only he wasn’t necessarily pulling for Woods, at least not to begin with.

Kimmage: And initially you’re not rooting for Tiger.

“I think Francesco (Molinari) was up there but I guess for me it was more . . . obviously there’s the hype train that comes along with Tiger winning, and six months of being asked about it at press conferences,” Rory explained. “So I’m looking at it selfishly, ‘Jesus! Here we go!’ But once I took myself out of it, and thought of what it meant for the game, it was, ‘Wow! What he’s doing is pretty special.’

As for what surprised him during that historic final round from Woods was how he drove the ball.

How well he drove it – he drove it great. People always talk about what he did in his prime, when he chipped in against DiMarco in ’05. What they don’t remember is that he bogeyed the next two holes, went into the play-off and blasted it way right off the tee. But this was . . . he birdies 16 and then steps up on 17 and hits this unbelievable tee shot. So that was different.

Be sure to check out the first part of Kimmage’s sit down with McIlroy here and the full second part here. It’s always extremely interesting hearing from one of golf’s best in such an unfiltered setting, especially when Woods is part of the discussion.