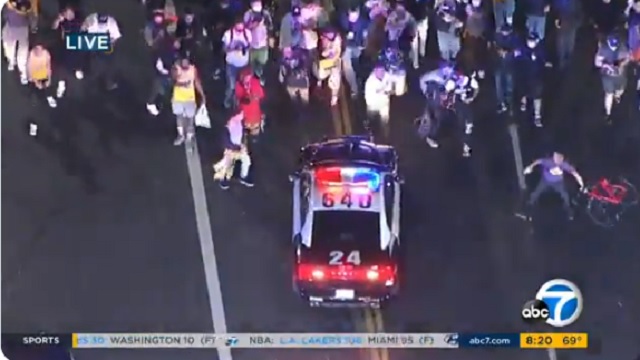 Lakers fans got a bit rowdy during their championship celebration in LA.

After the Lakers beat the Heat on Sunday night to win their 17th NBA championship, fans hit the streets of LA in droves to celebrate.

.@Lakers fans have taken to the streets of #DTLA after the team's win tonight. @RoadSageLA reports from #Sky9.

#NOW: Lakers fans are getting rowdy in downtown LA as they celebrate the big win. @abc7chriscristi is overhead and we are live on @ABC7 pic.twitter.com/eC7fpY551D

At one point a large crowd of Lakers fans surrounded a police car and began throwing objects at it.

Here’s another look at Lakers fans surrounding police cars near the Staples Center.

LAPD wants to shut down the @Lakers celebration in front of Staples Center but fans aren’t leaving. Shortly after this video the fans surrounded the LAPD cruisers and started banging on their cars. After the police retreated and brought out reinforcements, fans backed off @CBSLA pic.twitter.com/E9tEPA8kGK

Police eventually had to come out in riot gear to disperse the crowd.

LAPD is taking much more aggressive actions to shut the celebrating down. Mounted police and officers in riot gear are fanning out along Figueroa @CBSLA @ChrisVHolmstrom @SaraDonchey pic.twitter.com/3OppZhtAhv