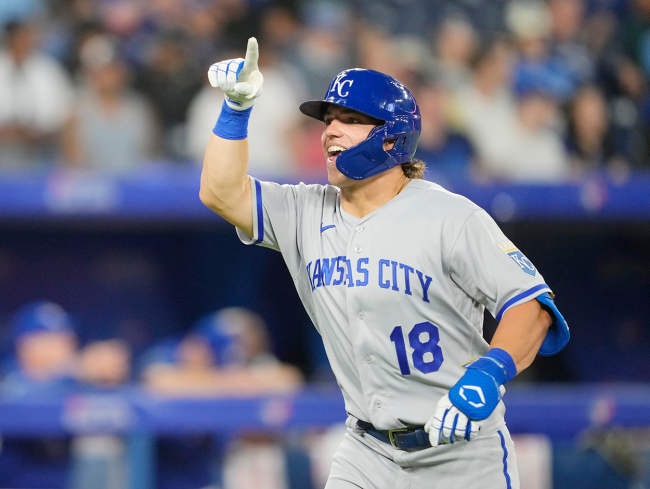 After hearing his name called in the 21st round of the 2018 MLB Draft, Nate Eaton spent the last four years rising through the Minor League ranks. On Thursday, he had his dream come true.

The Kansas City Royals announced that 10 unvaccinated players were unable to make the trip to Toronto and called up eight replacement players. Eaton was among them.

The 25-year-old not only made his first MLB start against the Blue Jays, but he iced the cake of a 3-1 win with a solo home run in the ninth inning. His family’s reaction is incredible.

Eaton began his first Major League at-bat by working a 3-2 count against Anthony Banda on nine pitches. The 10th pitch was gone.

Eaton sent it 416 over the wall for his first MLB hit and MLB first home run.

Nate Eaton wins the 10-pitch at-bat with a solo homer for his first MLB hit!

As Eaton got ahold of his first-career blast, his mom, brother and sister-in-law were in attendance. Considering the fairly insignificant attendance, the fact that it was the ninth inning, and the fact that the opposing team hit a home run, the Rogers Centre was dead quiet—

… except for Nate Eaton’s mom.

“The only voice I could hear was my mom’s,” said Eaton after the game. “These are the people that have been there my entire life and they sacrificed so much for me to get to this point, because without them, I couldn’t have been here. So to make them proud is really awesome.”

As Eaton crossed the plate, he pointed to his family in the stands. They were overcome with emotion, especially his mom, and their reaction will bring all of the feels.

His mom and family after his homerun. 👏 pic.twitter.com/fz9tc2nF47

Few things in sports are greater than a family reacting to their son/brother/cousin/etc.’s first hit in the Major Leagues. It’s even better when it’s a home run in a quiet stadium. Chills!