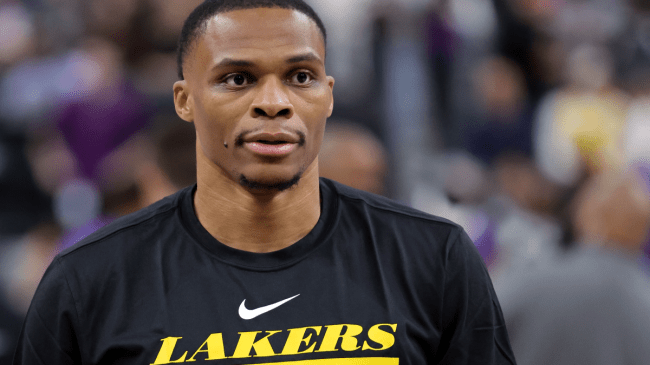 Russell Westbrook’s future in Los Angeles is uncertain. The point guard struggled in his first season with the club last year, and he’s been at the center of trade talks since the beginning of the offseason.

That hasn’t stopped him from buying a new house in the LA area.

In fact, it appears he’s trying to get closer to teammate LeBron James. Russ’s new $37M home is across the street from LeBron’s, making the pair neighbors. It reportedly has eight bedrooms, 11 bathrooms, and sits on a half-acre lot. He seems to be getting cozy in Los Angeles despite the possibility of being dealt from the Lakers.

Westbrook is from the Long Beach area, meaning this recent purchase might little to do with his stability on with the team. Still, many are wondering how it might affect the squad’s chemistry.

LeBron actually pushed for the Lakers to sign Russ in the first place when many reports say they could’ve landed DeMar DeRozan instead. Unfortunately, things haven’t worked out as last year’s team missed the playoffs entirely after being considered a championship contender. The start to the 2022-23 season hasn’t been much better with LA losing their first three games.

Westbrook’s struggles have continued as the guard is shooting less than 30% from the field. While Russ and James might be friends, the performance on the court could be driving a wedge. Look no further than LeBron’s reaction to Westbrook’s game-ending shot during a loss earlier this year.

Fans are now offering up some hilarious reactions to seeing the teammates now become neighbors.

Now that Russ has bought a house right near LeBron's, things are getting awkward 😂 pic.twitter.com/Sa6HMm6Y4k

He’s probably building a shed with all those bricks

James is stuck with Westbrook for the time being. That could obviously change should the trade rumors persist. If Russ’s on-the-court struggles continue, the Lakers could look to offload him sooner rather than later.