Russell Westbrook Had A Guy Come Out To Check And Make Sure The Rim Was Straight, It Was, And The Guy’s Reaction Was The Best 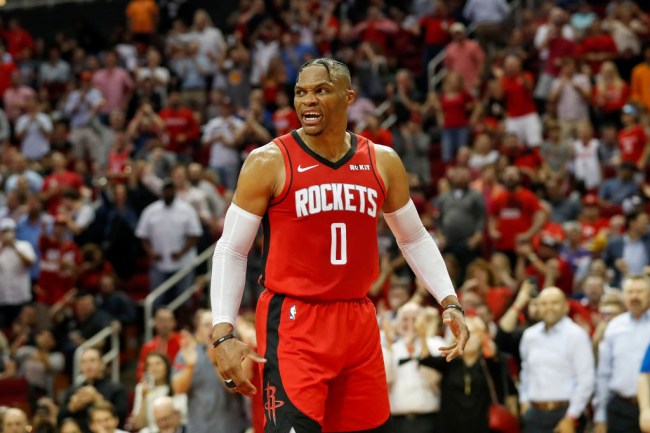 Russell Westbrook got a lot of things done against the Clippers on Thursday night. First and foremost he dropped 40 points to help his team grab a win. He also got hit with a technical foul late in the game after waving Patrick Beverley off the court after he was ejected.

While those two things certainly had an impact on the game, so did his unique request at the start of the second half.

The start of the third quarter was delayed a bit because Westbrook was convinced that the rim the Rockets were shooting on was crooked. He asked for, let’s call it a rim aficionado, to come out and make sure the rim was level.

In the blink of an eye came out a man equipped with a ladder from one of the tunnels in the Staples Center. He climbed up top, placed his leveler on the rim, saw that it was level and turned to the players with a shrug saying ‘it’s perfect.’

This guy doesn’t care about what you think, Mr. Westbrook. This is clearly a man and a staff that takes pride in their level rims, don’t be questioning them, Brodie.

There’s something about the nonchalant shrug and look-back saying ‘it’s perfect’ that’s extremely funny. It’s like the guy is a chef and someone sent back their food, he tasted it and gave that ‘what the hell’ look because it literally couldn’t be any better.

I’d like to think I’d be that confident while standing on top of a ladder in front of thousands of people and giant professional athletes where I could turn to them and tell them all was fine, but I’d probably fall off the ladder and break an arm from being so damn nervous up there.

Shoutout to that guy for being confident and sticking it to Westbrook.