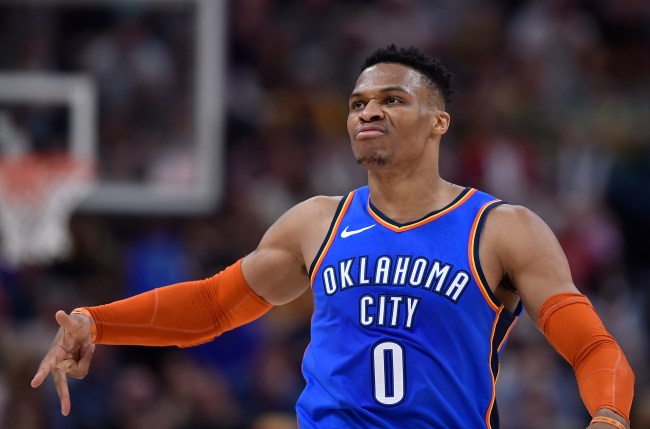 Russell Westbrook’s tumultuous relationship with Jazz fans continued this week after the All-Star guard threatened a male fan and his female companion seated near courtside during a game on Monday.

After the game, Westbrook told reporters that the man directed disrespectful comments his way, comments he believed to be racially-motivated.

“The young man and his wife in the stands told me to get down on my knees like you used to,” Westbrook said. “And for me that is completely disrespectful. I think it is racial. It is inappropriate.

“There are people that come to the games to say mean disrespectful things about me and my family. For many years I have done all the right things and never done anything to hurt or harm anybody. Never been in any trouble. Never fought a fan.”

Westbrook has had a particular gripe with Utah Jazz fans, which came to a head in the final of last year’s first round playoff series in Utah. Russ blasted Jazz fans for their trash talk that often times crosses the line.

“Here in Utah, man, a lot of disrespectful, vulgar things are said to the players here with these fans,” Westbrook said at the time. “It’s truly disrespectful. Talk about your families, your kids.”

Welp, a newly released video from Jazz digital media reporter Eric Woodyard seems to confirm Westbrook’s claim that Jazz fans are dickheads. Woodyard shared a video on Tuesday night that he claims came before Game 4 of last year’s first-round playoff series between the Thunder and Jazz.

A Jazz fan can be heard calling Westbrook “boy” by a fan. Russ tells the fan to stop, but instead he just repeats it. Westbrook took the high road in this instance and called over security.

To Russell Westbrook’s defense, here is even further proof of his previous interactions with Utah Jazz fans. In this video, @russwest44 is called a “boy” by a Jazz fan ahead of Game 4 of OKC’s first-round playoff series against Utah on April 23, 2018 at Vivint Arena. pic.twitter.com/lc6slA7fTo

I’ve said it once, I’ll say it again: Players should have the opportunity to box unruly fans at halftime. If the fan loses, he’s never allowed back in the building again. If he wins, he’s upgraded to courtside and has free reign to heckle. I’m going to go out on a hunch and say that Westbrook would flatten this motherfucker.

In the most recent incident, Westbrook was fined $25,000 by the NBA for his threat and profanity, while the fan was permanently banned by the Jazz organization.