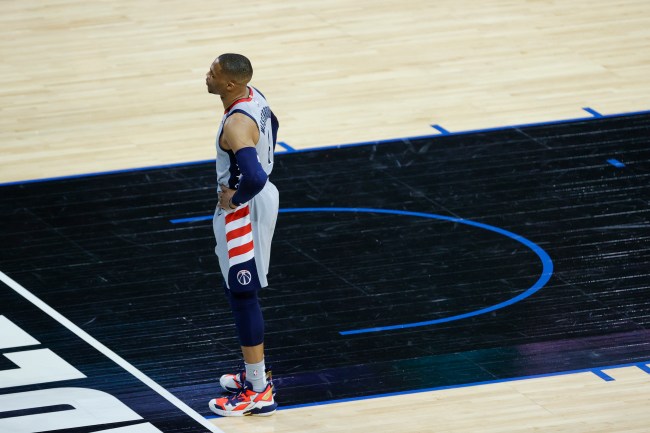 Stop me if you’ve heard this before but Philly is drunk, reckless and pounding its chest again due to an inferiority complex that manifests itself in assaulting its own athletes and squaring off against a bi-polar Bradley Cooper at tailgates in Silver Linings Playbook.

After Russell Westbrook suffered an ankle injury that sent him to the locker room in the 4th quarter of a Sixers 120-95 Game 2 win, a scumbag fan dumped popcorn on his head while entering the tunnel.

It took no less than a six security guards to restrain Westbrook from committing a well-deserved homicide.

Russ got heated after a fan threw popcorn at him pic.twitter.com/XyMRUxUVwc

This fan should never be permitted in a #Sixers game ever again after throwing popcorn on Russell Westbrook while leaving court with injury. And they can track his ass down. No class! pic.twitter.com/ra029MaBDF

After the game, Russ spoke about the incident and the larger issue of fans acting “out of pocket” with zero fear of retribution.

"This s— is getting out of hand, especially for me. The amount of disrespect, the amount of fans just doing whatever the f— they want to do. It’s just out of pocket, man."

—Russ after a fan poured popcorn on him in Philly pic.twitter.com/NLvjg8fg3S

“To be blatantly honest, man, this sh*t is getting out of hand. Especially for me. The amount of disrespect, the amount of fans doing whatever the f*ck they want to do. It’s out of pocket, man. Any other setting, I’m all for the fans enjoying the game and having fun, it’s part of sports, I get it.

But there are certain things that cross the line and any other setting I know for a fact that a guy wouldn’t come up to me on the street and pour popcorn on my head. Because he’d know what would happen.”

By the way WE AS THE PLAYERS wanna see who threw that popcorn on Russ while he was leaving the game tonight with a injury!! There’s cameras all over arenas so there’s no excuse! Cause if the 👟 was on the other 🦶🏾.🎥 #ProtectOurPlayers

I’d be remiss if I didn’t mention that Skip Bayless had a spot on take. Monumental day.

I feel for Russ. He has been maybe the biggest target in the league of fan verbal abuse and disrespect. The NBA needs to have a security guard positioned above the tunnel so players are protected as they walk through. More @Undisputed, now on FS1pic.twitter.com/VUtsYzB0NO

Only one way to make this right: Feed Westbrook the fan.