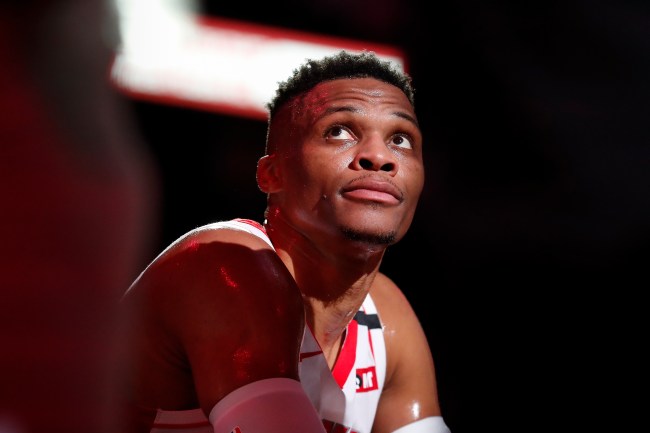 If there’s one thing we know about Russell Westbrook, it’s that he has lots and lots of intensity. The Houston Rockets point guard and one-time league MVP plays with a passion and enthusiasm that’s unmatched by nearly every one of his NBA peers. And, while it’s rare to see a superstar like Russ maintain that kind of energy every single night, it turns out that he’s always been a gym rat who just wanted to hoop — even if it meant snubbing the GOAT, Michael Jordan, for an autograph as a kid.

Appearing on The Tonight Show Starring Jimmy Fallon Tuesday night, Russell Westbrook detailed a story about a time at MJ’s basketball camp when he was 10 or 11 years old and blew off the chance to get Jordan’s signature. It wasn’t because he was being some little brat, but, instead, because he was more interested in playing in a pickup game. Talk about some balls from such a young kid, right? Most people — even grown-ass men — would sacrifice anything to meet Michael Jordan face-to-face. Not Russ, though. Take a look at the story below.

“My coach was like, ‘Come on, come on, come on. You’re going to miss the opportunity to get a picture with Michael Jordan and an autograph with him.’ Myself, I said, ‘Don’t worry, I’m okay, I don’t need it right now.’

“So I didn’t get a picture with Michael Jordan, didn’t get an autograph. I literally didn’t get in line. I just kept playing basketball, kept hooping.

“When camp was over and I got home, my mum and dad were like, ‘Did you get the ball signed?’ I literally was like, ‘No, I was playing a pickup game.’ At the time, it didn’t click to me.”

Man, Russell Westbrook has always just been built differently than other people. He never takes a day off. He plays with a huge chip on his shoulder. He won’t back down from a challenge — even if it costs him the chance to meet Michael Jordan. That’s pretty awesome.

Luckily, Russ’ decision as a kid didn’t come back to bite him in the ass when it came to MJ; because Westbrook signed with Jordan Brand in 2013, even getting his own signature shoe. So, hey, maybe Brodie’s choice at 10 or 11 years old actually left a big impression on His Airness.