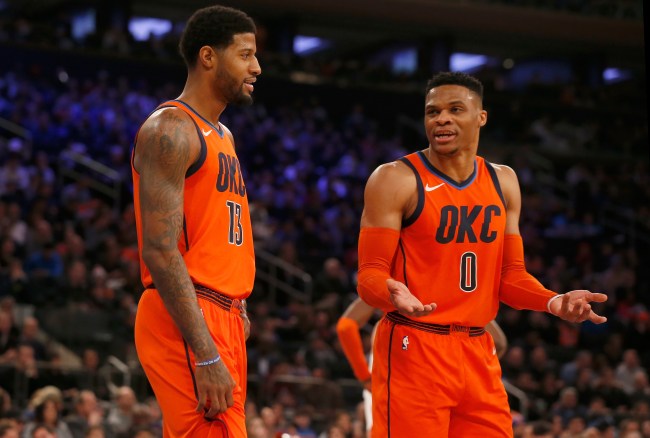 The OKC Thunder are in rebuild mode after losing two of their biggest stars in recent weeks.

Just last week it was revealed that Paul George had demanded a trade to the Clippers after being recruited by Kawhi Leonard.

After the Clippers met with Leonard for approximately three hours at head coach Doc Rivers’ house in Malibu on Monday night, both sides went to work to make that happen. At the same time he was meeting with the Los Angeles Lakers and Toronto Raptors this week, Leonard was meeting, calling and texting with George, trying to convince him to find a way out of Oklahoma City.

For George to join Leonard with the Clippers, however, he’d have to ask for a trade from Oklahoma City — and that wasn’t going to be pleasant, considering the way the franchise had treated him in the two seasons he’d played there and the bonds that he’d formed.

But George felt like it was a once-in-a-lifetime opportunity, to play at home in L.A. alongside a generational talent like Leonard.

According to a report from The Athletic’s Shams Charania, teams around the league were aware that there was some “discontent” between George and Russell Westbrook.

This week Westbrook requested a trade to Houston and the Thunder obliged.

The Oklahoma City Thunder have agreed to trade Russell Westbrook to the Houston Rockets for Chris Paul, first-round picks in 2024 and 2026, pick swaps in 2021 and 2025, league sources tell ESPN.

Oklahoma City GM Sam Presti worked with Westbrook and his agent, Thad Foucher, to deliver the former MVP to his preferred destination: A reunion with James Harden, per sources.

Apparently, Westbrook had inquired about getting traded by the Thunder after the team got eliminated from the playoffs by the Blazers.

Westbrook met with the Thunder front office this week to say he would welcome a trade following Paul George’s departure to the Clippers. But an individual with knowledge of the talks said Westbrook initially broached the subject after OKC’s season ended with a first-round loss to the Portland Trail Blazers.

Kind of crazy that Dame Lillard’s series-ending shot in the playoffs pretty much ended the Westbrook-George era of the Thunder.

DAME
FOR
THE
WIN pic.twitter.com/KKr037LNZS