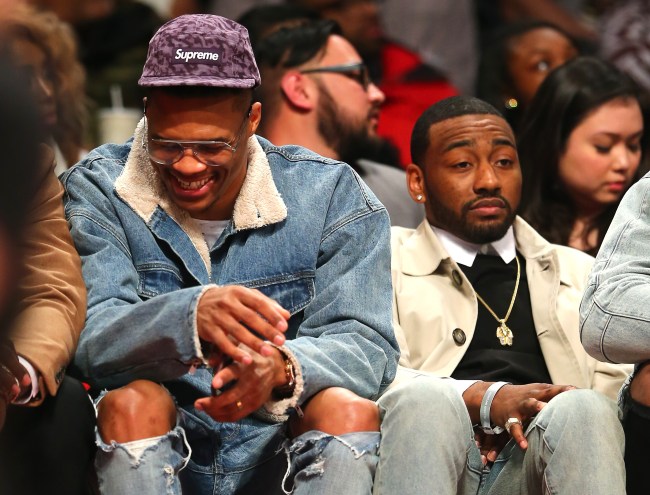 The NBA offseason is off to a fast start, with the league currently operating in warp speed as it prepares for the upcoming 2020-21 regular season; which starts about a month from now (December 22). With the NBA Draft being held Wednesday, November 18 and free agency beginning on Friday, each team seems to be wheeling and dealing, as a few big trades have already happened — and rumors are flying about more to come.

While most eyes are on the James Harden-Brooklyn Nets situation, one that should pique everyone’s interest is the rumor about Russell Westbrook and John Wall possibly being swapped for one another. As far-fetched as it might seem, NBA reporter Shams Charania recently tweeted that both the Rockets and Wizards have at least discussed the possibility of a blockbuster deal, although it’s early.

The Rockets and Wizards have discussed a deal centered on Russell Westbrook for John Wall, sources tell @TheAthleticNBA @Stadium. No traction yet, Rockets are seeking more assets.

A former league MVP who was just acquired by the Rockets last offseason, Russell Westbrook appears to be the friend nobody wants to have sit at their lunch table, as his name is being thrown around lots this offseason — with reports that the Charlotte Hornets could end up acquiring him. As for Wall, the former No. 1 overall pick has all the talent in the world, but he’s coming off a major Achilles injury, so nobody knows for sure what he’ll be like once he returns.

As for Westbrook, he’s already asked out of Houston, reportedly being frustrated playing alongside James Harden. There’s also rumors that players aren’t happy with team owner Tilman Fertitta being a Trump supporter. Bottom line: Houston has a serious problem.

Should this deal actually happen, could it possibly be one with two big names but little substance? One could make the case, as both Westbrook and Wall haven’t proven to be the type of superstars that can lead a team to a deep playoff run as the primary option. Still, assuming both are healthy and motivated, this trade would rock the league.

With Chris Paul already being traded to the Phoenix Suns, all of the Harden rumors going around and tons of maneuvering prior to the draft and free agency, the NBA offseason seems to be another nutty one. We’ll have to see how everything turns out once the dust settles, but a Russell Westbrook-John Wall deal could potentially leave a serious ripple effect on each conference.