Welp, If Russell Westbrook’s Gonna Get Traded, There’s Reportedly Just One Team That Leads The Pack To Get Him 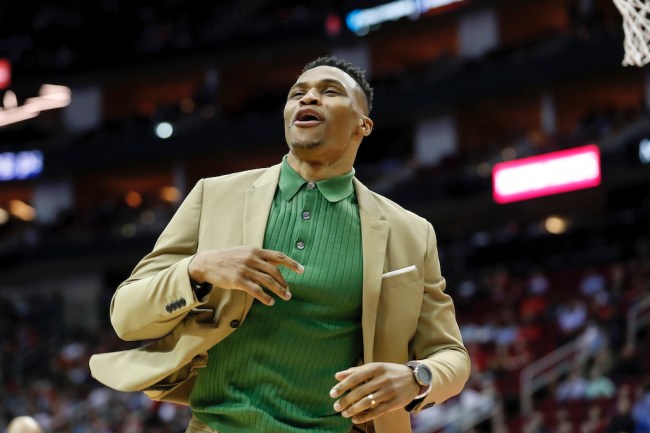 Remember that story about a young Russell Westbrook blowing off an autograph opportunity from Michael Jordan at His Airness’ hoops camp so the kid could play more ball? It sure seems like all is forgiven these days, because, after Westbrook reportedly requested a trade from the Houston Rockets, Jordan’s Charlotte Hornets are allegedly the leaders in the clubhouse for the former MVP’s services.

According to NBA insider Shams Charania, because of the relationship Westbrook has with MJ’s Jordan Brand, with whom he has a sponsorship deal with, Charlotte has emerged as the early frontrunners for the talented guard. Take a look below at what Charania has heard from his sources around the league.

“The Hornets have emerged as a potential suitor for Westbrook,” Charania said. “There have been a couple of teams mentioned as a possibility for the one-time league MVP. But in Charlotte there are movable veteran contracts, as well as the Jordan Brand connection for Westbrook.”

The Hornets have emerged as a potential suitor for Rockets All-Star Russell Westbrook, sources tell our NBA Insider @ShamsCharania. pic.twitter.com/8hineXP3AN

One of the best players in the league, Russell Westbrook averaged 27.2 points, 7.9 rebounds and 7.0 assists per game for the Rockets last season. But from the beginning, he and fellow superstar James Harden clashed, with both struggling to adjust to having another alpha on the floor — especially during crunch time.

Although a deal isn’t imminent, there are tons of rumors floating around right now about the unhappiness of both Westbrook and Harden, with reports claiming neither All-Star has been pleased with some of the offseason moves the franchise has made. Some of those involve hiring a first-time head coach to replace a departed Mike D’Antoni, while also seeing the general manager, Daryl Morey, leave to go run another organization (Philadelphia 76ers).

In terms of fit, should the Charlotte Hornets land Russell Westbrook, the team does have a few young pieces like Terry Rozier, Devonte Graham, P.J. Washington and Miles Bridges, among others, who the guard could be paired with to try and reach the postseason. But even with a former league MVP, that roster’s not competing for a championship.

The Hornets underperformed last season by going just 23-42, not even making it to the NBA bubble to end the abbreviated season. While Westbrook doesn’t have a say in where he might end up, he might regret asking for a trade from the Rockets should he be moved to a non-contender like Charlotte, where he’ll just waste away for the remainder of his prime.

Given Russ’ massive contract — which includes more than $84 million over the remaining two years — a trade isn’t easy. So we’ll have to see how all of this plays out. Unfortunately, it almost seems like we’re too far down the road to just turn back around and forget that any of this happened, so a Russell Westbrook trade almost seems inevitable, even with that enormous contract of his.