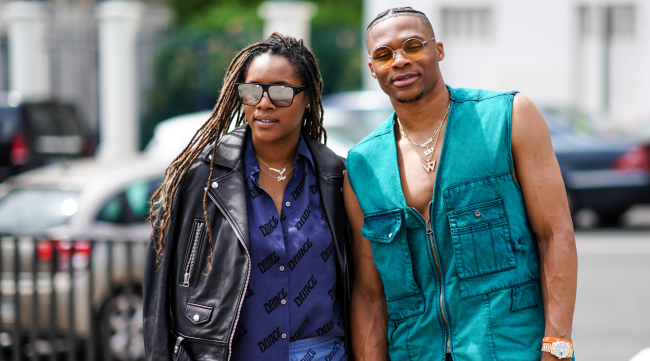 On Tuesday, Stephen A. Smith was doing what he does on ESPN’s First Take when he decided to comment on Russell Westbrook breaking the Washington Wizards’ franchise record for triple-doubles against the Pacers on Monday.

Westbrook put up 35 points, 21 assists, and 14 rebounds to lead Washington to a victory over Indiana, but Smith was apparently not all the impressed.

“…here’s the thing about Westbrook’s big night: I don’t give a damn about any of it,” said Smith. “Because the Wizards aren’t very good. They’re not going anywhere. You’re 17-28 in the Eastern Conference for crying out loud. You’re not going anywhere, and this isn’t the first time Russell Westbrook has played on a team that has fallen short.”

Utmost respect to Russell Westbrook, but last night’s numbers mean absolutely nothing to me. pic.twitter.com/FRaanNyHpn

Smith added, “If Russell Westbrook was a better 3-point shooter, could you imagine what he would’ve done? I’m here to tell you he would’ve won a championship by now.”

Smith’s criticisms eventually made their way to Russell’s wife Nina Westbrook and she did not hold back in her response.

“So… how tiring it is to be minding your own business and have notifications pop up on your phone about people being negative and hating on your family,” Nina Westbrook wrote in an Instagram Story. “There are several things wrong with what @stephenasmith says here.”

Russell Westbrook’s wife goes off on Stephen A Smith for his comments about Russells accomplishments pic.twitter.com/VccGR6QbI6

“Ironically, Russell makes history and @stephenasmith comes out of nowhere to share his non-congratulations,” she continued. “When he does bad we hear about it, when he does will we don’t hear about it OR @stephenasmith has to make sure that his accomplishments are diminished. Respectfully, I’m not a fan of yours.”

She then added, “Russell is the happiest he’s ever been. Not having a championship does not ‘hurt him a lot.’ You know nothing about him. If you did, you’d know that he is way way way more than a championship. He is a champion of life. A champion of his people. He doesn’t care about YOUR championship, and certainly not YOUR opinion.”

For his part, Russell responded to Smith’s diss by going out and becoming only the second player in NBA history to average 25 points, 15 rebounds and 15 assists in three games.

He then gave a two-and-a-half minute response to Smith’s criticism after the game, pointing out how winning a NBA championship does not define him or his career.

Russell Westbrook on Stephen A. Smith

"One thing I won't allow to happen anymore is let people create narratives & constantly just talking shit for no reason about me because I lay it on the line every night and I use my platform to be able to help people all across the world." pic.twitter.com/8oJi0E4dwT

AYE RUSS JUST GOT AWAY WITH MURDER pic.twitter.com/vAdoGFTFyK