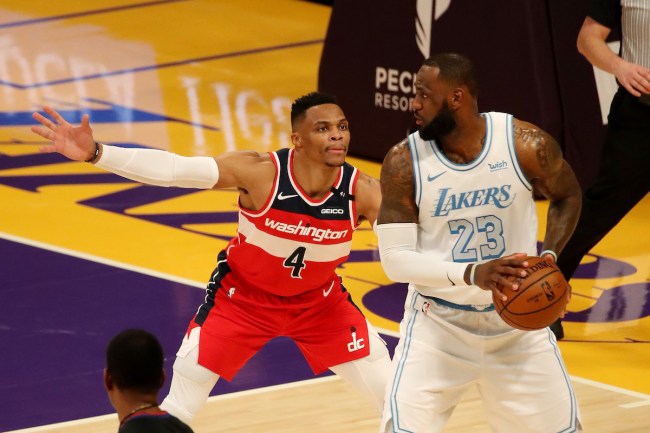 For 14 seasons, Greg Olsen was a consistent NFL tight end, so he knows a little about what it takes to be successful at the position and make it in the league. But could Olsen actually teach two NBA All-Stars, LeBron James and Russell Westbrook, the intricacies of the game of football to make them both great at the sport? He thinks so, telling Colin Cowherd that a year of training with the two could lead to All-Pro nods.

So why the supreme confidence from Olsen, who reached three Pro Bowls during his NFL career? It actually has nothing to do with his own coaching skills, but, instead, because of the insane athleticism that both James and Westbrook have.

“If I could coach LeBron James for one year, I could make him an All-Pro wide receiver,” Olsen said. “There’s no question in my mind.” Olsen added, “I could turn Russell Westbrook into an All-Pro free safety.”

Don’t get it twisted … Olsen wasn’t trying to brag about his coaching skills — he just told Cowherd the NBA players are just that damn talented.

“There’s a handful of those guys that could make the transition just because they are so unique,” Olsen said. “But there’s few and far between those guys.”

Could LeBron be an elite WR?

On the latest @ColinCowherd podcast – @gregolsen88 describes how he believes that he could coach LeBron into an All-Pro NFL player pic.twitter.com/yARwcvbLTs

Look, I’m never going to doubt guys like LeBron James or Russell Westbrook, who are two of the most gifted athletes we’ve ever seen in our lives. Sure, the two may be MVPs in the NBA, but would anybody really doubt that they’d make it in the NFL if a guy like Greg Olsen coached them a little bit? That same passion and work ethic each has on the hardwood would absolutely translate to football — because that mindset often can’t be taught.

Who knows what type of NFL player Westbrook would become, but one would imagine he’d play physical like he does on the court, more than happily knocking a guy out in the open field. As for James, his love for football is well-known, and some have even talked about how he would’ve been an all-time great had he decided to pursue the sport in high school instead of focusing on basketball.

It’s fun to think about Greg Olsen taking LeBron James and Russell Westbrook for a year and molding them into All-Pro NFL players, but, unfortunately, it probably won’t happen. Still, imagine your favorite team with one of those two either lining up as a receiving threat or as a hard-hitting tackler in the secondary. Talk about scary AF, right?