LeBron James ‘Always’ Thinks About What If He Had Played Football, Wants To Be A HS Coach 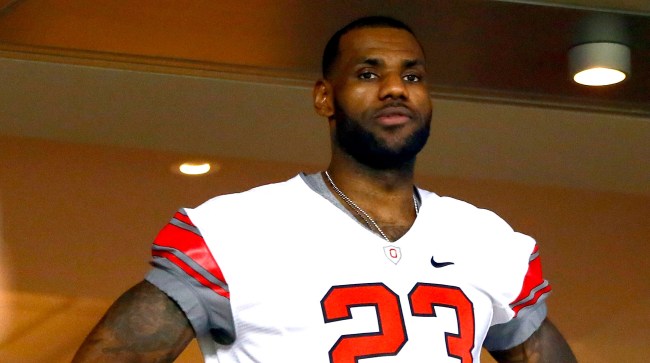 LeBron James is one of those once in a generation athletes. Like Michael Jordan before him, as soon as he began playing in the NBA there was little doubt he was going to end up being one of the greatest players ever.

Unlike Jordan, James was already built like a Mack truck before he had ever played a game in the league. Someone with his physique combined with his athleticism made him about as big a no-doubt star entering the draft that the NBA has ever seen.

Naturally, at 6-foot-8, 240 pounds coming out of high school, many have wondered how James would have fared if he had pursued what he calls his “first love” – football.

“Before I had aspirations of owning an NBA team I always talked about how cool it would be to be a high school football coach,” said James. “Be it a head coach or an offensive coordinator. Some Andy Reid-type sh*t where I’m making crazy plays. I just love the sport. I watch it all the time. It’s just in me. It’s how I grew up.”

After all, James had played wide receiver at St. Vincent-St. Mary – making the varsity team as a 14-year-old freshmen – and instilled fear in defenders tasked with trying to bring him down.

In his first game action, LeBron caught nine passes for 100 yards and two touchdowns. “I went out and lit that game up,” said James.

He ended up getting football recruiting letters from schools like the University of Florida, Florida State, Ohio State, Notre Dame, Michigan, and South Carolina.

This week, Christopher Kamrani and Bill Oram of The Athletic took a look back at what could have been, speaking to some of James’ childhood friends, opponents, and The King himself.

It’s been 20 years since James last played a football game – his friends wouldn’t let him play football as a senior despite hauling in 57 receptions as a junior – for obvious reasons.

Those who watched LeBron’s high school career at St. Vincent-St. Mary High are linked by the belief that James, considered by many to be the greatest basketball player ever, could have been one of the greatest football players ever.

“I think we would’ve been talking about potentially a two-sport Hall of Famer,” said Archer, whose station on Dueber Road is a six-minute drive from the Pro Football Hall of Fame.

“He was going to be Randy Moss,” said David Peterson, a financial advisor who lined up at cornerback against James in LeBron’s junior year.

James even admitted to The Athletic that even to this day, “I always think about it.”

They then tell the story of how James almost did it when he was 27-years-old.

In 2011, during the NBA lockout, Jerry Jones offered him the opportunity to try out for the Dallas Cowboys. Pete Carroll of the Seattle Seahawks sent him a jersey and an invitation to give it a shot.

His friends eventually talked him out of it, the NBA lockout ended on Christmas day, and the rest is history.

Check out the rest of the legend of LeBron James the football player (there is much more) over at The Athletic.