Stephen A. Smith Goes On Unprompted Rant About Women In Combat Sports: ‘I Don’t Want To See Women Fighting In The Octagon’ 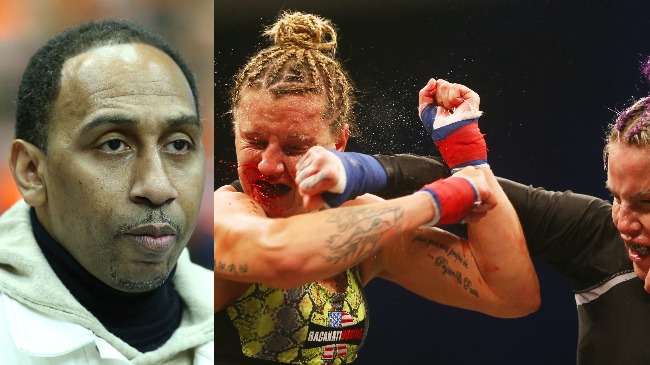 After two weeks of massaging, my wife has given me clearance to invite the fellas over to tune in, and I urge you all to do the same.

One man who is not invited to my place to guzzle eight-to-ten double IPAs over the fastest growing sport on the planet is Mr. Stephen A. Smith. Rest assured, he is not sad about it.

Smith, who has gotten heat for his blowhardish opinions on combat sports in the past, may have painted his Mona Lisa of buffoonery in a recent interview with The Ringer’s Larry Wilmore on his “Black on the Air” podcast.

Wilmore asked Smith about his opinion on women taking positions as coaches and executives in sports, and after Smith offered a limp “I love it,” he spiraled into an offhand tangent about his disdain for women in UFC.

“I think that there’s an awful lot of women who are incredibly qualified to do the jobs they’re doing. Where I jump off the bandwagon is where they try to engage physically.

Credit where credit’s due: Stephen A. may be right about that last sentence.

Believe me Mr Stephen A Smith, we like watching you hit pads just about as much as you like watching women fight in the cage. 😂 pic.twitter.com/50yTGbXXlm