Russell Wilson Apparently Almost Got Traded To The Browns Prior To The 2018 NFL Draft, Per Report 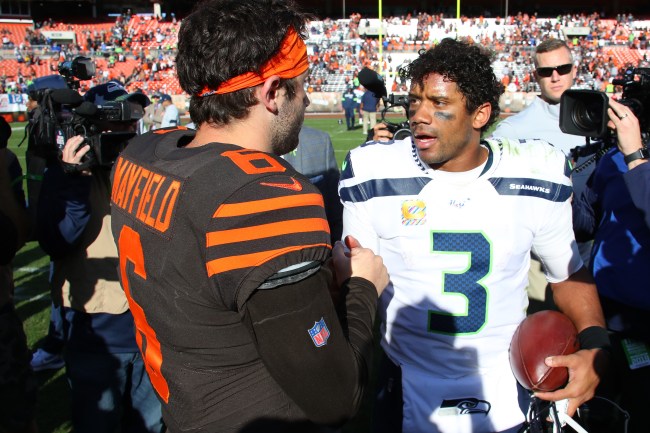 At this very moment, Russell Wilson might be the best quarterback in the NFL. Go ahead and debate that all you want to, but, given his body of work with the Seattle Seahawks over the past eight seasons — which has included two Super Bowl trips (one of which was a victory), and a playoff appearance in all but one of those years — it’s hard to argue with where DangeRuss stands on the pantheon of current signal-callers in the league.

Given all that Wilson has accomplished, it means the guy’s salary isn’t cheap. It’s why the Seahawks locked up the seven-time Pro Bowler to a massive contract extension last offseason, guaranteeing him more than $107 million. Hey, when a team identifies its franchise quarterback, they do anything they can to hold onto him.

But prior to Seattle and Russell Wilson coming to terms on that mega-deal in the summer of 2019, a new report reveals that the team was at least in discussions with the Cleveland Browns back before the 2018 NFL Draft about a trade. No, seriously, one of the most dynamic quarterbacks in the NFL was reportedly on the trade block right as he entered his prime, according to NBC Sports’ Chris Simms.

At the time, the Browns held the No. 1 overall pick — which, ultimately, was used to select Baker Mayfield — and the Seahawks were unsure of upcoming contract negotiations with Wilson. That led to some chatter that Russ may have been shipped to Cleveland in exchange for that top pick; but, obviously, the deal fell through. Here’s what Simms had to say about what he heard at the time.

While this is a couple years after the fact, it’s still shocking AF. Could anyone imagine Russell Wilson in Cleveland Browns colors? What could he have done to turn the franchise from a disappointment into a contender? Would the team still have gone out and traded for Odell Beckham Jr. and loaded up the offense with weapons for Wilson? So many questions, but, sadly, no real answers.

As for the rumor itself, Simms admits that he never followed up on what he heard prior to the 2018 NFL Draft, adding that he doesn’t know how serious the discussions between the Seahawks and Browns were. But, had this happened, and Seattle landed the top overall pick that year — and selected Wilson’s replacement in Mayfield, Sam Darnold or someone else — and Cleveland got a future Hall of Famer, the entire league would’ve been turned upside down.

As it stands, Russell Wilson led the Seahawks to the playoffs (again) last season, and Mayfield and the Browns continued their dominance of underachieving, winning just six games and getting their head coach fired. Ah, yes, life of a Cleveland sports fan is just full of “what ifs…?”