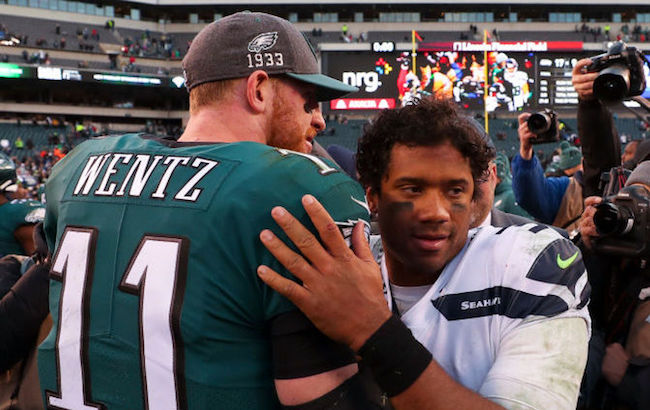 The Philadelphia Eagles kicked off the decade by deciding to give a rehabilitated Michael Vick a second chance when they tapped him to become the successor to Donovan McNabb. He initially managed to hold his own but the team would eventually add Nick Foles to the roster and spent the next few years trying to find a reliable starter (with middling success).

The team made some moves in order to acquire the second pick in the 2016 draft in an attempt to secure a franchise quarterback and decided Carson Wentz was the man for the job.

While the team’s record may not have reflected it, the consensus was that Wentz had shown an incredible amount of promise during his rookie year and saw his potential realized the following season when he helped the Eagles get off to an 11-2 start.

Unfortunately, Wentz saw his season come to an end after tearing his ACL and Philadelphia was forced to put its faith in Nick Foles, who did a pretty good job filling in by most accounts.

There was a sizeable faction that lobbied for Big Dick Nick to pick up where he left off but Wentz stepped back into the starting role after fully recovering only to see his season end prematurely yet again after hurting his back.

The quarterback managed to make it through this year’s regular season unscathed for the first time since his rookie campaign. Sadly, the same can’t be said for the postseason, as he lasted for less than a quarter after finding himself on the receiving end of a very questionable hit delivered by Jadeveon Clowney.

Josh McCown did what he could to help the Eagles overcome the setback but they ultimately saw their championship dreams dashed after coming up short against the Seahawks.

The win gave Seattle a cause for celebration but Russell Wilson had a more important matter on his mind, as he quickly tracked down Doug Pederson to get an update on Wentz’s status.

Russell Wilson went up to Doug Pederson postgame and asked if Carson Wentz was okay.

On Monday, Wentz provided the world with an update and it appears he’s on his way to a full recovery.

So dang proud of this team and how we battled and overcame so much this season. Not the ending we envisioned but we will all grow and be stronger because of it! The fight and resiliency that this team displayed was so impressive. Love these guys! Also, appreciate the thoughts and prayers— Im feeling good today and will be just fine! Head injuries are a scary thing so I appreciate everybody’s thoughts and prayers. Hate not being out there to finish it out with my guys because of a play like that, but it’s the unfortunate part of this game. It’s all in Gods plan, not mine! Trusting in him 🙏🏻 Philly, year 4 was one fun ride. Appreciate the love and support— especially the real ones who were with us through the highs and lows 👊🏻 Onward to next year… big things comin’, believe that! #flyeaglesfly

Props to Wilson for handling the situation in a way that was as classy as Clowney’s response was not.