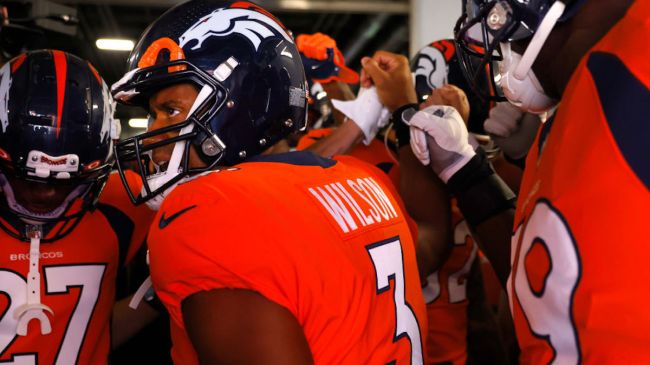 It’s certainly been no secret over the last decade or so how much of an unabashed cornball Russell Wilson is. But now that he’s left the somewhat siloed confines of the Northwest, it appears that the former Super Bowl winner has become cornier than ever.

In the last few weeks alone, for example, the 33-year-old signal-caller has gotten ripped on for apparently copying Tom Brady’s social media strategy and showing up to the Broncos Week 1 game dressed like he was going to prom.

This latest example of Wilson’s cringeworthiness may be the most brutal example yet, though, as new footage from the Broncos sideline sees Ciara’s husband attempting to get everyone on the team to call out whether the opponent’s offense is running a pass play or run play.

Our very own writer Jorge Alonso wondered if Wilson is the most hated on player in the league:

Russ might get the most hate in the league lol https://t.co/0epR0q67bm

Imagine being #96 and this clown yelling at you to scream run or pass. This guy is the worst human on earth https://t.co/W2o6tYrPPN

Bruh Russell got them on that pee wee football mentality 😭 https://t.co/pGj1yVdwDB

“No way he is a real person. I think he’s playing a character on a daily basis,” someone joked.

No way he is a real person. I think he’s playing a character on a daily basis. https://t.co/KBaKd7Qi9f

Respectfully, I’d tell him to get tf out my face lmaooo https://t.co/KtqZriofTs

One NFL fan joked that seeing that video has convinced him to now be on Richard Sherman’s side of the pair’s beef:

The Broncos are a high school football team. Embarrassing. https://t.co/UfnbdxuMZ1

After the first two weeks of the season, the Broncos find themselves with a 1-1 record and have put up just 16 points in each game. This is particularly disappointing when you consider the money they gave Wilson in the offseason and the fact that they’ve played the Seattle Seahawks and Houston Texans so far, who are among the league’s worst teams.

Wilson himself hasn’t looked all that convincing, either, as the former Seahawks QB has completed just 59% of his passes for 559 yards, two touchdowns, and one interception so far this season.