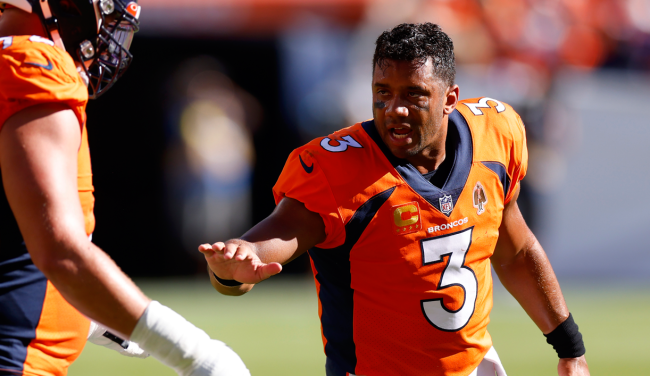 Over the past several years, NFL fans have gotten accustomed to Tom Brady sharing a post game video on social media. In those videos, Brady is usually talking about his team’s latest win (something he has been able to achieve 77 percent of the time in the NFL regular season).

This past weekend was no different from Touchdown Tommy who even joked about his sideline meltdown and his tossing of the tablet.

Ho hum, another win, another Tom Brady social media video. Everyone is used to those by now.

What NFL fans are not used to seeing is Russell Wilson posting a video following a win that looks like it was taken from a similar template as Brady usually shares after a W.

“Gotta Love Winning! First of Many!” DangeRuss wrote in the caption to his video.

Naturally, Wilson had to slip a “Let’s ride, baby,” into his clip compilation, but that isn’t why fans are making fun of him on Tuesday. Or, well, that’s not the main reason at least.

“Copying @TomBrady straight up I can’t lie. Did you hire the same editor?” one fan asked in the comments.

This dude wants to be Brady so bad https://t.co/N1UnIEO6YC

This dude is elite CORNY https://t.co/LtjGapC4e5

“Brady already beat you in a Super Bowl. Now you’re trying to copy what he does after a win 😂,” the mockery continued.

The ABSOLUTE biggest nerd Alive…16-9 over the Texans 😂😂😂 https://t.co/etMQXSGgKr

Somehow you make me hate you more everyday. https://t.co/oLs7RziUCx

Even Denver Broncos fan were feeling a little cringe.

“Russ doing literally the same thing Brady does after a win his hilarious, insane, and infuriating at the same time,” another fan summed it all up.