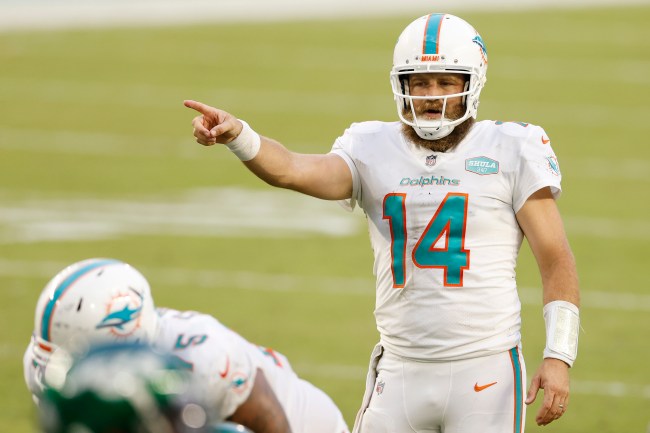 As if any of us needed another reason to love Miami Dolphins quarterback Ryan Fitzpatrick, the dude shows up to the team’s practice on Wednesday wearing the shortest short shorts ever seen on a 37-year-old man and further reminds us why he’s all-time. Fitzmagic’s still alive and well, baby, so take a look at those nice, white thighs of his.

I was trying to get a pic of Tua at Dolphins practice today but Ryan Fitzpatrick was in the way 🍑 pic.twitter.com/weLl8b6Cr6

So why was the signal-caller showing off those man legs of his for all to see during practice on Wednesday? It’s not because he had just gotten back from an audition to find America’s next top leg model, but because he was honoring ex-teammate Isaiah Ford, who Miami traded earlier in the week to the New England Patriots, and who used to wear his shorts mega short during practice.

According to Safid Deen, who covers the Dolphins for the Sun Sentinel, Ryan Fitzpatrick had grown quite fond of Ford during their time together in Miami, and figured donning some booty shorts was the right thing to do as a final farewell to his now former receiver.

#Dolphins LB Jerome Baker says QB Ryan Fitzpatrick wore his shorts like this as a tribute to WR Isaiah Ford, who wore his like this in practice before being traded away. Fitz was very complementary of @IAF_1 during his time in Miami.

That’s a pretty awesome move by Ryan Fitzpatrick, who obviously didn’t even need to show Ford any recognition after the wideout was traded away. But the decision to send the receiver to New England was clearly one that impacted Fitz, because the longtime veteran quarterback seemed enamored with Ford’s work ethic after earning his way onto the active roster.

Per Deen’s column for the Sun Sentinal:

Fitzpatrick, who appears to have trimmed his bread, was quite complimentary of Ford during their time together as Dolphins teammates, calling Ford “Mr. Reliable” for being “in the right place at the right time, and doing the right thing.”

“Isaiah has been on the active [roster] and off, on the practice squad and up and down. He’s worked so hard,” Fitzpatrick said of Ford after the best game of Ford’s young career where he had six catches for 92 yards against the New York Jets in Week 14 last season.

“He’s a guy we have so much faith in as quarterbacks because whenever anybody has a question, sometimes when coaches have questions, we’ll go back to Isaiah and say, ‘What is this signal? What is this route?’ and he knows everything.

This is what it’s all about, guys, and only goes to show why Ryan Fitzpatrick is the ultimate backup quarterback. Not only does he (surprisingly) still throw the pigskin all over the gridiron, but he’s got tremendous leadership skills for younger players to learn from. While he’s sad to have seen the team ship Isaiah Ford to New England, at least the quarterback got one last tribute in for the guy by wearing the shortest shorts he could find.