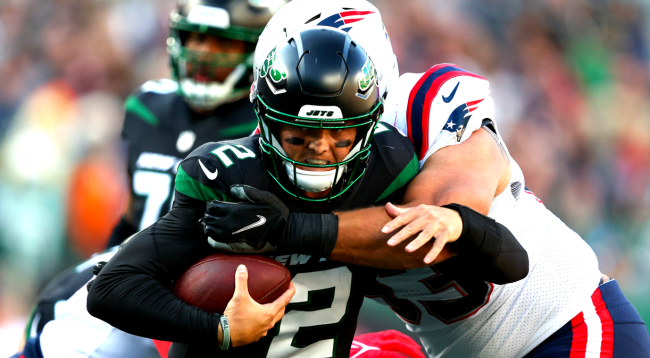 Wilson, the Jets’ second overall pick in the 2021 NFL Draft, has thus far not lived up to his lofty draft status.

While Zach Wilson has gone on record saying that “he doesn’t care about stats,” other people like fans and the media actually do.

On Monday, after going 20-for-41 with three interceptions in the Jets’ 22-17 loss to New England, Get Up analyst Dan Orlovsky went off on Wilson, telling him, “It’s time to grow the fudge up, dude.”

On Thursday, 16 year NFL veteran Ryan Fitzpatrick, who is now a studio analyst for Thursday Night Football, was asked for his analysis of Wilson.

“Well, they drafted him so high for a reason,” Fitzpatrick said. “I think they’re really excited and they’ve surrounded him with a lot of good talent. Sometimes, these young quarterbacks, especially the ones that get drafted high, get put in situations where there’s just not a whole lot around them. This is a team where I’ve been very impressed with how they’re building, how fast their defense is, the playmakers they’ve surrounded him with.”

Not that he’s excusing Wilson.

“Some of those wild throws off his back foot, and the scrambles — this is a good enough team to where they don’t need that,” said Fitzpatrick.

“That being said, one of the biggest question marks I’ve had about him, and the thing that scared me last year, is when they called John Beck, his personal quarterback coach, to come out and help get his mind right during the season, and put him on staff,” Fitzpatrick continued. “To me, that was a giant red flag. I don’t know Zach Wilson, but that scares me a little bit.”

Fitzpatrick added that “having to fly someone in to make sure he was okay, and coddle him a little bit” is a problem in his eyes.

Perhaps the only bigger problem, at least in the eyes of Jets fans, is that head coach Robert Saleh confirmed this week that Zach Wilson’s job is safe.

Big L from Saleh. Why should Wilson have perfect job security when no one else does?