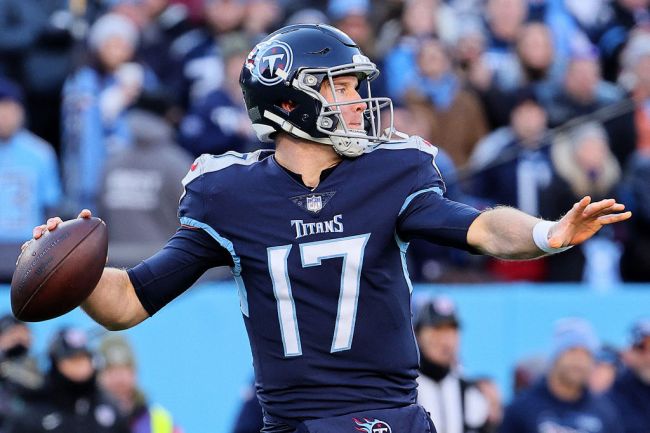 The Tennessee Titans had a pretty crazy first couple of days at the NFL Draft. On Day 1, they traded AJ Brown to the Eagles for a 1st round pick and a 3rd round pick. They immediately used the 1st rounder to draft his replacement. The Titans then proceeded to make another big trade on Day 2.

With Malik Willis dropping deep into the 3rd round and Ryan Tannehill not seeming like a long-term solution at quarterback for the team, the Titans traded their 3rd round pick and a 5th round pick to move up 4 spots and draft Willis.

It seemed like a great move that would lead to a smooth transition at quarterback in Tennessee. There were just a couple of problems. The first problem is that the Titans didn’t tell Tannehill they were drafting Willis.

Ryan Tannehill said he wasn’t informed ahead of time that the #titans were drafting Malik Willis. He did call Willis right after he was drafted to congratulate him.

The second issue is that Tannehill isn’t interested in mentoring Willis as he waits to take over as the Titans’ starting quarterback.

“I don’t think it’s my job to mentor him (Malik Willis), but if he learns from me along the way, that’s a great thing.” – Ryan Tannehill

This is an odd approach for Tannehill to be taking in the aftermath of this pick. I understand being upset about the Titans not communicating their intentions for the draft, but this also likely wasn’t their intention heading into the draft. There can’t have been many people expecting Willis to just be sitting there late in the 3rd round.

It’s also not really clear what Tannehill expected his future to look like as mentoring a young quarterback while starting for another couple of years seems like the best-case scenario for him.

Tannehill will be 34 years old in July, is coming off of his worst season as a Titan, and was a disaster in the Titans’ playoff loss to the Bengals. The team bringing in a quarterback to learn from him while developing makes all the sense in the world.

Tannehill likely didn’t have much support left as the team’s starter after his awful playoff performance and this surely won’t endear him to Titans fans. Unfortunately for Tannehill, this is one situation Derrick Henry probably won’t be able to carry him through.