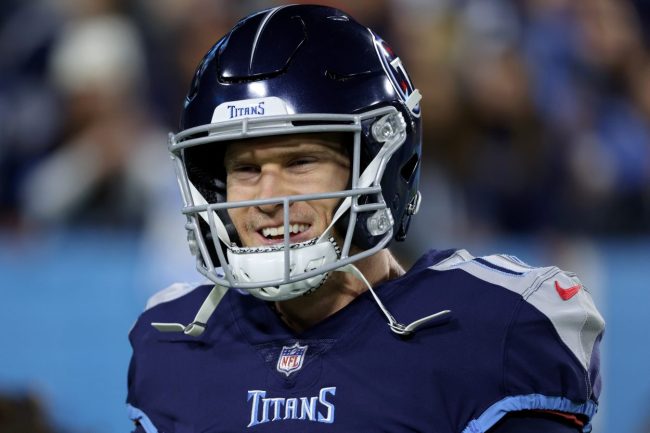 Ryan Tannehill and the Tennessee Titans made a big statement on Thursday. Much of the NFL world started to count them out after losses in three of the last four games, losing Derrick Henry for much of the season, and injuries to A.J. Brown and Julio Jones.

However, Brown and Jones were back on the field on Christmas Eve Eve and the former played a big role in an important win over the 49ers. With the win, the Titans moves to 10-5 on the season with two games left against the Dolphins and Texans.

Making the playoffs is right within reach and earning a top seed remains a legitimate possibility in what has been a chaotic, unpredictable season.

During Thursday’s win, Tannehill completed 22 of 29 passes for 209 yards and a touchdown. He also shared what he wants from Santa Claus with a Christmas-themed audible.

During the closing seconds of the third quarter, Tennessee lined up in a bunch formation. Tannehill noticed something about the defense and wanted to get his offense in order.

To do so, the 33-year-old turned to either side and declared “RED RIFLE! RED RIFLE!”

Tennessee’s social team stitched the call with ‘A Christmas Story’ after the win and it’s the perfect way to celebrate one of the best (but darkest) scenes from a classic movie.

Ralphie ended up getting his official Red Ryder, carbine action, 200-shot, range model air rifle, with a compass in the stock and this thing that tells time. Will Tannehill?