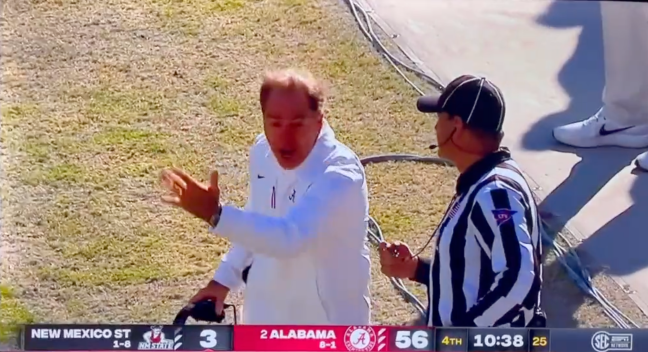 Another Saturday, another epic Nick Saban sideline tirade. In the midst of a 59-3 win over New Mexico State, during with the Crimson Tide covered the spread, the Alabama head coach went berserk about a call against his team.

Holding a 56-3 lead with just under 11 minutes left in the fourth quarter, the home team was called for a defensive offside penalty. The cameras panned to Saban on the sideline and showed him proceed to lose his mind on the line judge.

He disagreed with the call. Clearly.

During the incredible meltdown, Saban turned beat red, ripped his headset off and did not hold back. He was YELLING yelling.

Remember, Saban had this reaction had his team was winning by more than seven touchdowns. Take a look:

56-3 SABAN MELTDOWN. INJECT IT INTO MY VEINS. pic.twitter.com/JbwCuyFKDW

As usual, social media loved watching Saban blow a gasket in a game that was over at halftime. It never gets old.

“People can mock this all they want… this is why Saban’s been on top for so long,” said ABC Columbia’s sports director Mike Gillespie.

“Saban is up by a 50 piece and he still refuses to take a snap off…. That’s why they have been Bama,” said another.

Believe it or not, Alabama was actually losing this game at one point. New Mexico State scored the first three points of the game and then went on to punt nine times and fumble once.

It was not a great outing for the Aggies, and the Tide continues to roll.