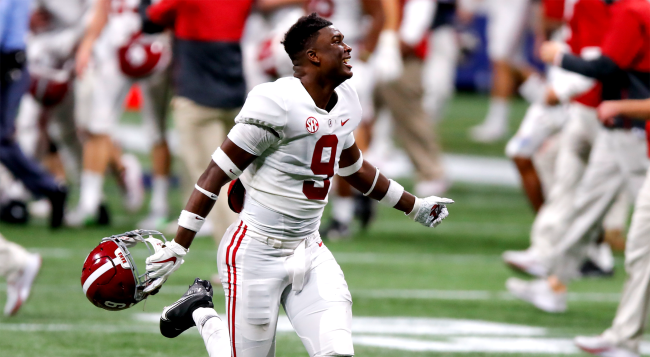 “Our quarterback (Bryce Young) already has approached ungodly numbers. I’m not going to say what they are. He hasn’t even played yet. He hasn’t been a starter. If I told you what he’s … it’s almost 7-figures. And it’s like the guy hasn’t even played yet. That’s because of our program,” Saban said at the Texas High School Coaches Association convention, according to 247Sports’ Chris Hummer.

For the record, Bryce Young has thrown a total of 22 passes for the Crimson Tide. Twenty-two.

Oklahoma quarterback Spencer Rattler, who has already unveiled a personal logo, has wasted no time cashing in. On July 31, at the National Sports Collectors Convention in Chicago, Rattler will charge $150 per autograph, $60 per inscription and $150 to take a photo with him. Rattler, expected to be one of the premier prospects in the 2022 NFL Draft, is represented by Steinberg Sports and Chris Cabott for marketing, the same group that represents Chiefs quarterback Patrick Mahomes and Tagovailoa.

Earlier this month it was reported that all 90 scholarship football players at Miami were going to be offered contracts from American Top Team – one of the top MMA camps – for name, image, likeness. Every player on a football scholarship at The U who accepts the deal will make at least $6,000 per year.

Other big signees raking in NIL pay since the new rules kicked in on July 1 include Master P’s son Hercy Miller, a freshman basketball player at Tenessee State, reportedly signed a $2 million endorsement deal with an “American technology company.”

Craig this kid who has never played a down at almost 7 digits will make more money then a lot of college coaches and if he is a star in a year he will make more than almost all the coaches minus Saben and a few others. If that’s not ungodly for a kid that hasn’t played IDKWI.

This is a solid point, but they are allowed to hire agents to handle the deals. Any good agent will know a financial advisor they can connect the players with. Yes, there will be unscrupulous agents, but those existed before and will exist forever.

That's good recruiting by Saban right there. "Come here and get paid." And it's actually legal now...

Lol you think class work is the priority?