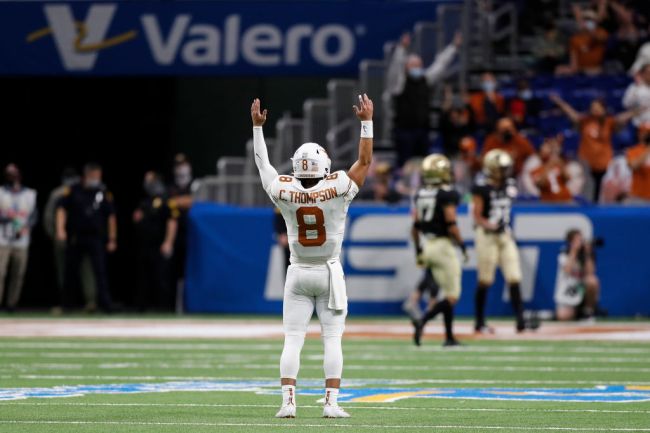 NCAA athletes are finally allowed to earn profits from their names, images and likenesses. The amount of money that can be made from off-field deals vary based on status and following. That makes what Texas quarterback Casey Thompson is doing even more impressive.

Should he so choose, Thompson, a sophomore, can make a fortune in the coming years. However, his first NIL opportunity will be not-for-profit.

Thompson is partnering with the video messaging app Cameo. The app allows fans to pay for a personalized video message from their favorite personalities, celebrities, figures, professional athletes— and now, collegiate athletes.

The Longhorns’ projected starter is charging fans $50 for each video. He will not see a cent of the proceeds, instead donating all of the money made to the No Kid Hungry campaign.

“All the proceeds will go to NoKidHungry.org,” Thompson said on his Cameo page. “That’s an organization that helps bridge the gap between the one in every six Americans that go hungry every year. As many as 13 million children in America could go hungry this year, and I’m happy to donate all the proceeds to the organization.”

According to the campaign’s website, it is “the only national campaign committed to ending childhood hunger in the U.S.”

NIL for a good cause.

The NCAA ended its ban on NIL on July 1. Numerous athletes have already profited through off-field endeavors over the last week and massive deals are coming in for entire teams. Miami quarterback D’Eriq King is among the most profitable, showing just how much Thompson can/will make.

While the money is certainly coming in the future for Texas’ best hope at returning to relevance atop the college football world, he is using his first opportunity for a great cause.

Thompson is not the only collegiate athlete doing good with the new ruling. Florida State defensive lineman Dillan Gibbons is using the NIL ruling to help out his disabled friend.

Isn’t it great that the NCAA waited so long to allow athletes to use their platforms in such tremendous ways? Surely it would have been horrible to see athletes giving back to their communities and great causes around the nation.