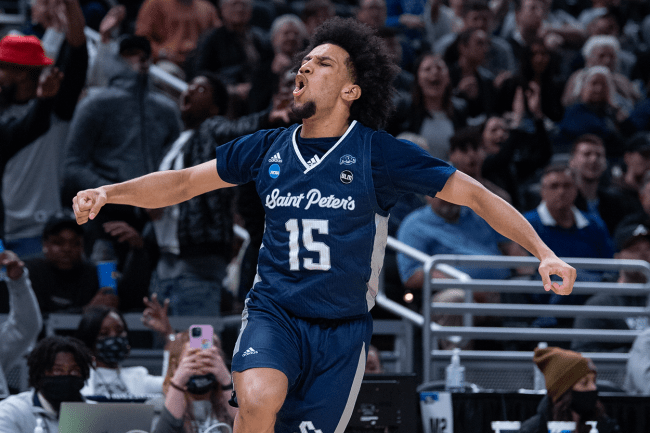 Saint Peter’s University basketball is the best story of the NCAA Tournament this year. The 15-seeded Peacocks knocked off No. 2 seed Kentucky in the First Round and then advanced to the Sweet Sixteen with a win over No. 7 seed Murray State.

At the forefront of Saint Peter’s folklore is guard Doug Edert and his legendary mustache. It’s impossible to talk about the Peacocks without discussing the glorious mustache.

Beyond the viral March Madness legend, the Saint Peter’s run is truly remarkable. When you look at the numbers behind the Cinderella run, it really puts things in perspective.

As does this thread of insane stories from a former Peacocks basketball coach:

Ryan Patrick Woerner served as the Director of Men’s Basketball Operations and an assistant coach with Saint Peter’s from August of 2012 to August of 2014. His account of things that went on in and around the program is truly hard to believe, especially considering that the team is now in the Sweet Sixteen.

My thread: as somebody who worked on staff with @saintpetersuniv Men’s Basketball for two years, precisely how INSANE and impressive it is that the @PeacocksMBB are in the @MarchMadnessMBB Sweet 16. Alums, staffers – feel free to jump in.

He said started with the fact that the athletic department’s weight room shared a wall with very important classrooms.

Our players could not blast music during team lifts because the weight room bordered on classes going on.
Not Phys Ed class – the weight rooms wall literally bordered where Philosophy 101 was taught.

He also told an anecdote from when a very big, important game was cancelled because of a leak in the roof.

The year after I left staff the team was playing well – and I was super excited to see the guys play @GoJaspers @steve_masiello at Yanitelli. @ESPNU game – packed with students. Notice boom lift on court during warmups and people mopping. Game was CANCELLED due to leak in roof.

When the games were actually able to be finished, postgame press conferences were held in a random room in the rec center.

Press conferences were held in a yoga/spin studio downstairs. There was a pool in Yanitelli that the SPU would rent to any paying customer. A visiting coach walking downstairs post-game would regularly encounter screaming kids in swim gear + random people in towels post-workout.

Woerner claims that the program had not paid its bill for basic needs in a full year.

One season we were confused with the lead time on our @BSNSPORTS aka Anaconda products – practice was starting soon and we had old basketballs and practice gear that needed to be replaced. It was revealed soon-after that our bill has not been paid in 12 MONTHS.

He also shared photos from the basketball staff’s office, which flooded on a frequent basis.

Our offices routinely flooded because we were at the top of the Yanitelli. Here’s a photo of a regular workday with an inch of water on the floor. Note: the carpets/sheetrock/rotted ceiling tiles were never rehabbed after the flooding events. pic.twitter.com/DMMum49mAi

When opposing teams came to play in Jersey City, they occasionally were unable to shower because there was no hot water.

When @LoyolaRamblers (coached by @PorterMoser) came to play us at then-Yanitelli Arena, there was no hot water in the building. Vivid memories of their players departing the facility post-game to board the flight home to Chicago with long faces and no showers.

One time, prior to Woerner’s first season with Saint Peter’s, the team had to practice at a local high school.

My first practice on Div I level as coach. Exciting time, right? Two days before Oct 15th, we are informed that floor is scheduled to be done. Had to practice up the street at @Hudsoncatholic for first few. School had not looked up 1st day of practice (went to Tourney in 2011).

Another time, the locker rooms had flooded because of a burst pipe.

When @GoGriffs visited for a Sunday matinee, we arrived to find that the corridor outside the locker rms flooded due to a burst pipe. The home/visitor locker rms were adjacent, and I remember Billy Barron hugging a wall while hopping puddles at half on way back to locker rm.

The facilities at Saint Peter’s were so inferior that once, during warmups, the rim of the basketball hoop just straight-up fell off.

From @CooperCalz – former Iona Assistant – “My 2nd year at Iona. During warmups at St. Peter’s – someone took a jumper, hit the rim, and the rim just fell off the basket. 40 min delay. Had to go get a new basket installed.”

Coaches literally had to sleep on the team’s locker room couches.

A fellow Asst. Coach and I (both unpaid) slept on the locker room couches 2-3 nights per week to avoid the exorbitant tolls to get home to NYC. Without getting too graphic, these were the only two couches in a locker room used by the whole team. It was, in a word, unsanitary.

And random people would just wander into the facility as if it was an open gym. In reality, it was a Division-I basketball gym that would typically be completely closed off at other programs.

It never occurred to me: how the heck did this guy get access to our balls and the facility itself. He was like a mythical character. There were always random people coming in who were not students to work on their game. It felt like a local Boys Club.