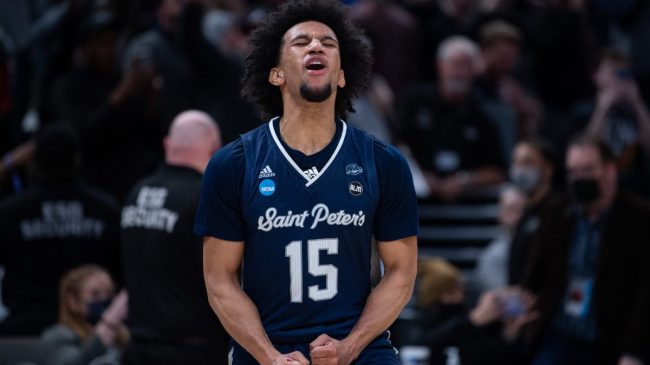 After knocking off Kentucky in the opening round of the NCAA Tournament, the Peacocks followed things up with an impressive win over Murray State.

The upset over Kentucky made headlines due to the opponent. The Wildcats are one of college basketball’s blue bloods, and they show it in their spending. Kentucky’s immense athletics budget is nearly 20 times the size of the Peacocks’.

But often times we see Cinderella runs end after that initial upset. Saint Peter’s is writing their own story, though.

Last night’s win over Murray State was equally as impressive. The Racers had lost just twice all season, posting the top win percentage of any team in the NCAA Tournament field.

The 70-60 win was a dominant one as Saint Peter’s never trailed. The second consecutive upset pushes them to the Sweet 16, and it’s kept one hopeful bettor’s wager alive for the time being.

One bettor has placed two separate wagers on Saint Peter’s to win the NCAA Tournament. The $25 and $50 bets would pay out a massive $37,000 should the Peacocks go all the way.

This bettor is holding TWO futures on St. Peters to win the tournament to win $37K

While the payouts are large, it may be best for this bettor to use the cash out option. While the Peacocks’ run has been entertaining to watch, it’s highly unlikely that Saint Peter’s will advance to the championship game.