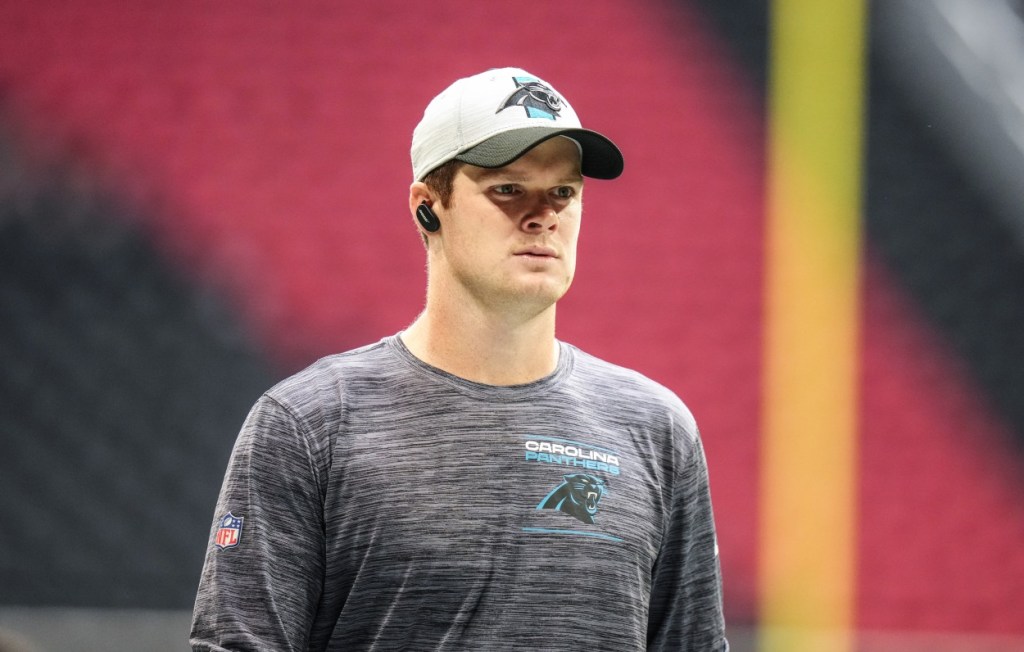 Carolina Panthers quarterback Sam Darnold was drafted #3 overall by the New York Jets back in 2018 and spent three season with them before being traded to the Carolina Panthers. The Jets never, at any point in Darnold’s time with New York, gave him the tools to succeed on the field. And that was reflected in his 13-25-0 record with the Jets.

He didn’t fare much better last season with the Carolina Panthers going 4-7-0 but Carolina’s star running back Christian McCaffrey only appeared in 7 games last season. Once again, Darnold was not given the tools he needed to go out there and light it up.

There were all sorts of headlines written during Sam Darnold’s time with the New York Jets but the one that grabbed the most attention was his infamous ‘seeing ghosts’ moment on Monday Night Football. The Jets were losing to the Patriots 24-0 in the second quarter when he said it and the comment blew UP on the Internet.

Sam Darnold was a guest on the Bussin’ With The Boys show this week, a pod I’ve been enjoying lately. And here he clarifies the origins of that phrase, what he meant, and why he wishes he could scrub it from his memory forever.

Sam Darnold: “When we started going no-huddle they were like ‘alright, we’ll just keep calling it’ (pressure). And yeah, it was just a tough day out there.”

BWTB: “And you had the saying ‘you were seeing ghosts out there’. Hey, that’s a tough meme.”

Sam Darnold: “Yeah, it is. It’s a tough thing to handle to this day.”

BWTB: “When all that stuff is cycling, what do you think about that?”

Sam Darnold: “It’s interesting because in our room, in the quarterback room, we would see guys kind of like in the pocket. You know how some quarterbacks kind of clench a little bit? We would say ‘they’re seeing ghosts out there’.

So I said that to my coach at the time when we were down 40-to-nothing because I was pissed. And I didn’t know what to say to be honest. And it just happened and they got it on live TV.”

BWTB: “Oh you f–ked up. That’s on you. I was hoping it would be like a coach or something but you sold yourself out.”

Sam Darnold: “It’s for sure on me. I’ll take that one to the grave. No doubt.

That was the worst game by far that I’ve ever played in my life. And I own up to it.”

On paying attention to the media…

BWTB: “That stuff, man, when you have one of those games… We talk about it all the time. On Week 1 you kind of sit there and we played at noon on Sunday so I had the full week to think about ‘I’m just a piece of s–t now, aren’t I? I’m garbage out here.'”

BWTB: “It’s just crazy how people want to manipulate things and if you go one bad game or something happens. Especially being a quarterback, it’s part of the deal. But as a quarterback, you live and die with the franchise.

If things are going well it’s like “wow, this dude is a stud but look how great the defense is and how good the wide receivers are.’ But when things aren’t good they’re like ‘it’s Sam. It’s the quarterback’s fault, it’s his fault.’ Does that seem fair to you to have that pressure all the time? For quarterbacks in general, not just for you.”

Sam Darnold: “Yeah, I think it is for sure.”

I’m half-joking about the money thing but you get ready all week and you know there’s a reason that the franchise lives and dies with the quarterback. You’re the one out there. You’ve got the ball in your hand on every single play. And it really has become more and more as the game keeps progressing, more and more of a quarterback league. I think it’s great for the game when numbers are going up. When passing statistics are going up I think it’s great for TV for people to watch and all that. That’s kind of my take on it.”

If you want to catch the full 1hr48min interview with Sam Darnold you can just hit the ‘play’ button on that video above and turn up the volume. Leave this open in a tab and you’re good to go!