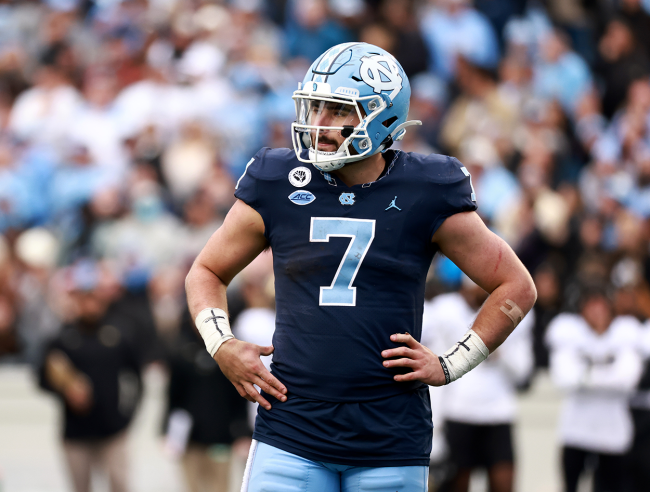 When it comes to the NFL Draft, the biggest draw, obviously, is at the quarterback position. This year, among the top prospects, Sam Howell might be the most interesting.

The former UNC quarterback decided to forgo his senior season and hopes to hear his name called later this month. As of right now, he is slated as a Day 2 prospect who could slip to the third round if the run on quarterbacks holds off.

More than likely, Howell will go in the second round.

While there are a lot of NFL scouts and analysts who are very high on Howell, there is one glaring issue that stands out— he didn’t really win in college. Now, that isn’t to say that every quarterback who has been drafted and succeeded in the NFL led his team to the College Football Playoff, but wins and losses stand out.

In three years with the Tar Heels, Howell won seven games as a freshman, eight as a sophomore and six as a junior. The 6-7 record last season came after Howell was a preseason Heisman Trophy candidate and UNC was considered a playoff contender out of the ACC. Neither of those things happened.

Head coach Mack Brown recently explained why Howell is good even though his team is bad.

During an appearance on The Dan Patrick Show, Brown spoke about his soon-to-be NFL quarterback. He discussed why the wins and losses never followed with Howell on the field.

“We weren’t as good,” Brown said. “We lose two great receivers to the NFL two years ago, we lose two outstanding running backs. All four of ’em played a lot and started. So we weren’t as good. And I felt like we had some entitlement, and I don’t think we helped him as much as we should’ve. But he’s tough. He ran the ball more because we didn’t protect as well. He’s who he is. He didn’t get hurt for three years. He led the team for three years. We’re in the mix with a lot of recruits. And last year, we had the eighth-best recruiting class in the country — largely because Sam Howell came here.”

“He changed the narrative. He was the best player in the state. He decides to come, other kids want to come. And I think pro scouts are going to see that. And you and I have been doing this for a long time — and one thing we know about the draft is about the time you think something’s 100%, it’s not. So it just takes one team that has interest — that’s not going to tell the others. They do not want the other people interested to slip in there and decide they want him and take him, and that’s what I’m hoping happens.”

As for Howell’s NFL Combine performance, Brown was quick to hype up his guy.

“Sam did a lot of things at the combine,” Brown said. “He had a lot of interviews there. What he did last Monday was throw the ball. And he brought in Ryan Switzer, who was a great player here in the past that’s looking for a home because he’s in between teams right now. And he brought in a couple guys from Charlotte that he’d been throwing with. And I thought he really put on a show. I’m sure I’m prejudice, because I wanted it to be good. But if I was a pro scout standing there watching it — and the evaluations I got from the pro scouts that did watch him, he was very accurate, he was all over it and I thought it was good and will really help his stock.”