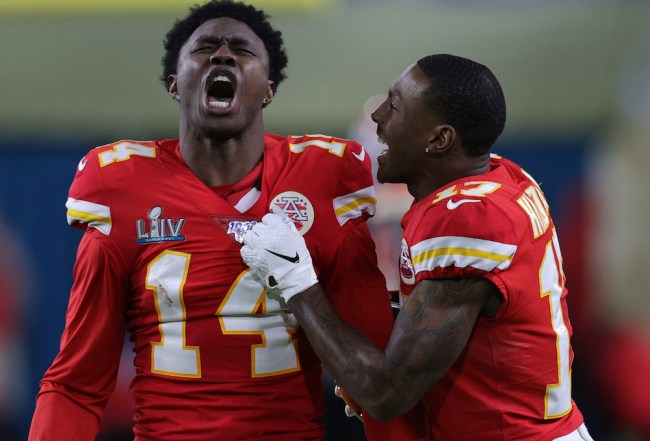 Sammy Watkins’s career in the NFL is filled with incredible highs and dangerous lows.

After winning a Super Bowl with the Kansas City Chiefs, Watkins contemplated taking a year off from the game. He told SiriusXM’s NFL Radio that money isn’t his worry. Mental health is Watkins’s biggest concern.

“I’m really focused on my health, mental health and really checking in on and making sure I’m ok with my life, my family, my wife, my kids. Once I figure that out, I think I will be fine.”

Watkins still hasn’t made a decision about next season but he sat down for an interview with Bleacher Report to discuss almost everything on his mind.

And what went wrong in Buffalo.

Watkins discussed his rough childhood in Florida and the friends from home who followed him to Buffalo. He’d admitted partying “every night,” drinking and smoking, and how that led to most of his issues and injuries.

“I would go out and get wasted,” he told Dunne. “Wasted wasted.”

Then he’d go to practice early in the morning.

He knows what everyone saw: a ceramic-boned bust. From broken ribs to a hip tear to a glute, a hamstring, a calf and, of course, the foot, Watkins could’ve been suplexed into 100 tables over his first three years in the NFL and come away healthier than this. The Bills had mortgaged their future not for Khalil Mack or Aaron Donald or Odell Beckham Jr. back in 2014 but rather for another reason for Buffalonians to curse the sports gods.

But here’s what you did not see: a 21-year-old drinking every night. That’s no exaggeration. Watkins partied “every night”—yes, “every night,” he repeats—turning downtown Buffalo’s Chippewa Street into his own personal frat party. Beer, liquor…Watkins didn’t discriminate in lighting his $12.8 million signing bonus on fire with friends who followed him north. “Living fast,” he calls it, holding up a pretend blunt. Yeah, he smoked plenty too.

He treated his body terribly.

“I would go out and get wasted,” he says. “Wasted wasted.”

Watkins told writer Tyler Dunne he had a routine of “drinking alone until 4 a.m., sleeping two hours and then waking up at 6 a.m. to start again.”

These days, Watkins seems to be in a better place thanks to taking better care of himself and allowing the voices in his head to keep him safe.

Watkins believes we all move through an astral realm in which you can manifest outcomes into the physical world. Like this past AFC Championship Game. Yeah, he made that all happen.

He hears voices that tell him when danger’s near.

He knows, for certain, that “words cast spells.”

He knows spirits—”entities,” he calls them—move through us all via the etheric body, one of the seven bodies of multidimensional consciousness. They can be good. They can be evil. They all want to experience our physical world. Most humans are not conscious of them. He is. He can consciously ignore evil spirits trying to cling to him. But he also believes this: When he refuses to let that evil spirit get what it wants in him, it can cling to someone close to him.

Watkins’s discussed so much in this interview, it really must be read to be believed.