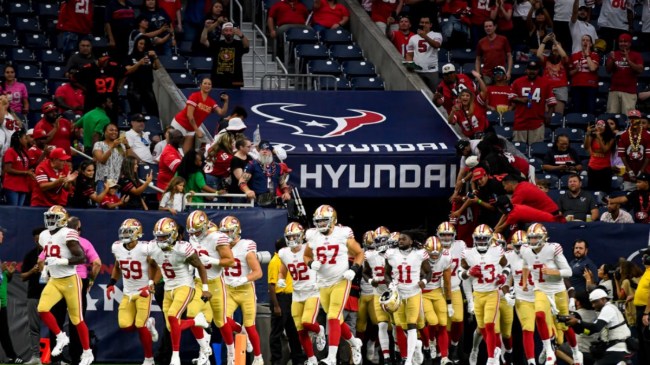 The San Francisco 49ers remain unimpressed with the NFL’s policing of gameday uniforms.

The league already drew the ire of 49ers head coach Kyle Shanahan this month because he won’t be able to wear the hat he has been wearing on the sidelines during recent seasons.

We’ve heard Kyle Shanahan talk to swarms of reporters this training camp, but today Murph & Mac get the Niners head coach for the first time this season 👀

Now they’ve hit a 49ers players with a ridiculous fine because of a non-existent uniform violation.

Yesterday, 49ers safety George Odum posted the letter from the NFL that he was sent to inform him of his fine. According to the letter, he was being assessed a fine of $5305 because his knees weren’t cover during the team’s preseason game against the Vikings.

With the letter, Odum also posted a picture that showed his knees were definitely covered throughout the game.

So I got fined 5k.. yeah The NFL something else’s. Talking about my knees NOT covered. Where? pic.twitter.com/Nn9CQpc3N8

The NFL’s uniform rules tend to be pretty ridiculous to begin with, but it reaches a whole new level of ridiculousness when they can’t even enforce their own rules correctly.

Hopefully they can get this fixed as it is abundantly clear that this fine was issued in error.

There are plenty of great rivalries in the NFL and this year it looks like football fans will be getting a new one. The matchup between the San Francisco 49ers and the NFL’s uniform policies should be a fun one to watch.