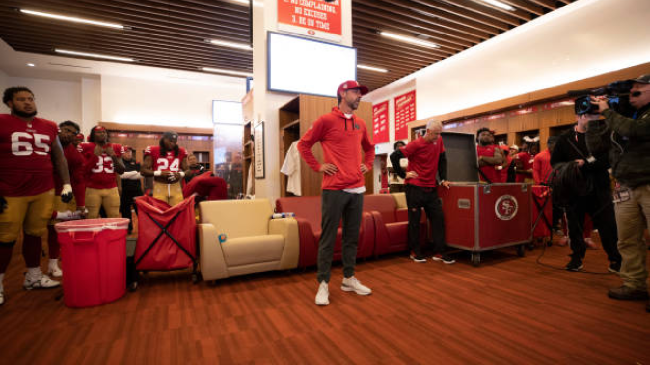 The San Francisco 49ers should be sending “thank you” baskets around to the rest of the NFL right now for not trading for Jimmy Garoppolo when they had the chance.

The 49ers spent the entire offseason trying to trade Jimmy G as they turned the team over to Trey Lance. Nobody ended up making a move for him and he ended up restructuring his contract to stay with the 49ers in a somewhat awkward situation where he would serve as their backup.

Then, the 49ers suddenly needed Garoppolo again just 2 weeks into the season when Trey Lance injured his ankle this weekend. The injury will unfortunately cost Lance the rest of his 2nd season in the NFL.

It also now leaves the 49ers looking for a backup QB after they spent the offseason trying to get rid of the one they had. Today, the 49ers tried out Kurt Benkert, Aj McCarron, Garrett Gilbert, and Kevin Hogan.

The quarterback market certainly isn’t plentiful 2 weeks into the season. The 49ers have to be feeling fortunate that these are options they are looking at as backups instead of scrambling to find a starter following Lance’s injury.

These could have been the options the 49ers were looking at to lead their team for the rest of season unless they were willing to trade for a QB right after trading away a perfectly good one.

Now, the 49ers remain firmly in playoff contention despite the injury to Lance instead of watching one play completely ruin their season.

It’s a good thing there wasn’t interest in Jimmy G a few weeks ago.