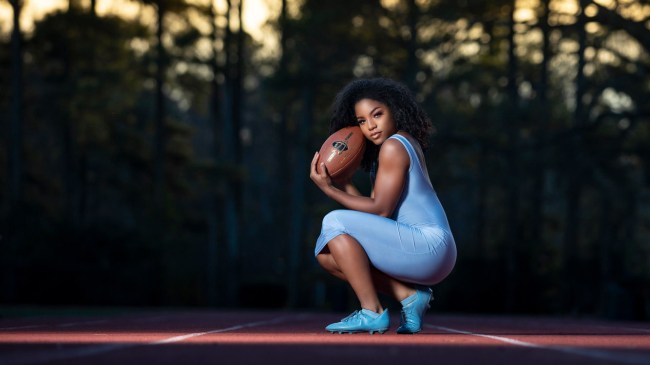 Recently, the Women’s Football League Association announced that they had signed Santia Deck, known as the “Queen of Abs,” to a multi-million dollar contract to play for the league’s Los Angeles franchise.

Because really, the world needs another professional football league, the Women’s Football League Association kicks off with an exhibition tour this coming May, and will begin its first official season in 2021.

According to a press release…

There has never been a deal like this for a woman on the football field. Fittingly, there has never been a self-made athletic brand like Santia Deck. Affectionately referred to online as the “Queen of Abs”, Santia Deck has made a name for herself in the fitness and social spaces. Now she is cashing in on that name, as well as a great deal of talent and drive.

The WFLA considers itself an organization out to make her story. It’s backed by the gutsy SHE Beverage Company, Inc. – “The Queen of Beverages”, – known for going toe-to-toe with giant corporations like Budweiser. In equally daring moves, the WFLA held a draft in Vegas and is offering the 1st ever multi-million dollar contracts to football’s women athletes. Santia Deck, is one of those few deemed worth a large sum. In fact, at an undisclosed amount, the league confirms that Deck’s contract is the highest-paid to date. None of this great honor and responsibility is lost on Santia. WFLA leadership is thrilled to have her on board.

Face2FaceAfrica reports the Atlanta-based Deck has been a collegiate track athlete, celebrity fitness trainer, produced fitness DVDs, wrote and published a book titled The Struggle, hosted a syndicated talk show, played for the Lingerie Football League and in the women’s flag football circuit.

“I have had many ups and downs in the sports world, but to know that I’m now the highest-paid female football player to date only confirms how God always has a plan,” said Deck about her new gig with the WFLA.

Proud to announce I’m the owner of the first ever professional women’s football league that PAYS their athletes… #WFLAFootball #womenempowerment #Iconn pic.twitter.com/G4hLWxUDyN

That’s right. Ja Rule is a WFLA franchise owner so you know the league is going to be a success.