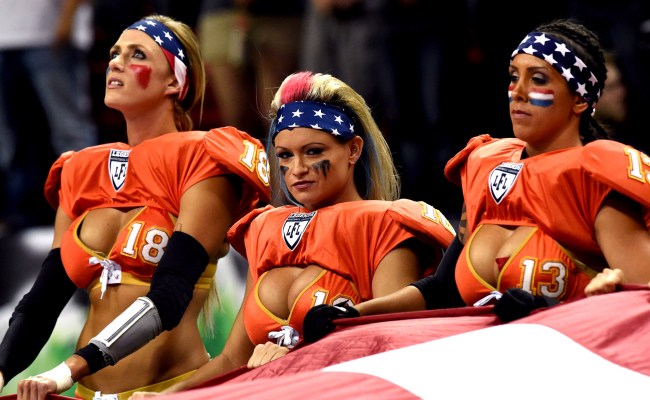 In 2009, the Lingerie Football League was born. It’s existence was owed to a special Super Bowl halftime pay-per-view called the Lingerie Bowl which was held in the years 2004 to 2006.

In 2013, the Lingerie Football League changed its name to the Legends Football League as the league moved to having players wear more “performance-related apparel”… which still kind of looked like they were wearing lingerie.

In late 2019, the Legends Football League revealed that it was not going to return for the 2020 season. However, just a few short days later, on December 17, 2019, the league announced it would be re-branding yet again, this time to be called the Extreme Football League, or X League.

The “new” X League bills itself as a “new era in women’s empowerment.”

“In the age of female empowerment in sports, the Extreme Football League (or ‘X League’) is set to kickoff April 2020. The X League will make history prior to even playing a single game, as the league is announcing it will provide its athletes with ownership equity as they build their tenure in the sport,” reads a press release on the league’s website.

‘This is not your father’s football league’, the X League will compromise of some of the world’s most athletic women, battling on a 70-yard field, in 7-on-7 full-contact tackle football. If you miss old school black-and-blue football, played by passionate athletes, the X League, is your league.

GameDays will be an experience unlike any other in sports, kicking-off with tailgate festivities and once inside the doors of the stadium, be ready for a modern-day Roman Coliseum type battle. Games will conclude with homes teams hosting post-game meet and greet with all attending fans.

The inaugural season of the X League will kick off Saturday, April 11 in Austin, Texas at H-E-B Center and conclude with the first-ever X Cup on Saturday, September 12.

The spring of 2020 is going to be one hell of a busy time for professional football.

Not only will the X League be playing games, there will be the XFL and Major League Football, which it turns out is actually a thing.