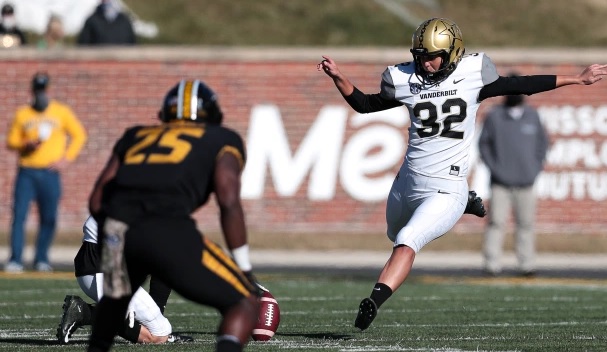 Vanderbilt women’s soccer goalie Sarah Fuller became the first woman to play college football for a ‘Power 5’ school in November after kicking off the second half against Missouri. While she wasn’t given the opportunity to attempt a field goal or extra point against the Tigers, that changed a couple of weeks later when she made two extra points against Tennessee.

As for why Vandy didn’t send her out to attempt any field goals during her time with the team, well, a video shared by Outkick shows she may not have been the most accurate from distance. The video, dated December 6 which was after her kickoff against Mizzou and a few days prior to her extra points against Tennessee, shows Fuller drill Vanderbilt’s long snapper with her attempt.

Video of Sarah Fuller drilling Vandy's long snapper at practice on 12/6, a few days prior to hitting two extra points against UT. (via @Outkick) pic.twitter.com/suXD85VKY0

The reaction to Fuller’s kickoff against Missouri was that it was an intentional squib kick toward the sideline, but after seeing this attempt at practice, you have to question whether it actually was intentional.

Vanderbilt lost to Missouri 41-0 in Fuller’s debut and after not attempting a field goal and only handling the one kickoff in the game, the SEC named her co-special teams player of the week. Fuller also made headlines following the Missouri game after it was reported that she called out her teammates at halftime for not supporting each other on the sidelines during the first half.

Following the season, Fuller had her jersey and helmet retired to the College Football Hall of Fame while also being invited to the inauguration of President Joe Biden.