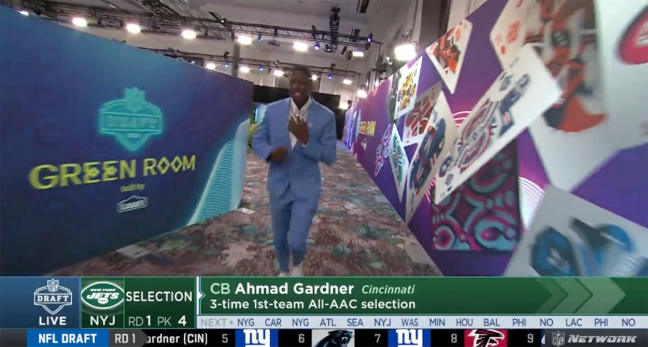 Ahmad ‘Sauce’ Gardner wasn’t the first cornerback off of the board in the 2022 NFL Draft, but he did go in the top five. Shortly after being selected by the New York Jets with the fourth overall pick, the Cincinnati star got an opportunity to show his new franchise what he can do.

Gardner’s speed and change of direction were on full display after he made an embarrassing blunder on his way out onto the stage.

Once Gardner heard his name called, he gave his family a hug and ran out toward the screaming fans. There was only one problem. He went the wrong way.

And it wasn’t like he went the wrong way for a few steps. Gardner took off down the green room and turned left, taking a solid 30+ steps in the wrong direction.

Eventually, after heading the wrong way for quite some time, somebody finally called his name to let him know. At that point, Gardner showed off his shifty footwork, cut back toward the stage and took off in the right direction, having to hold his awesome chain while doing so.

He got there eventually, take a look:

Sauce Gardner went the wrong direction on the way to the stage and then had to jog the rest of the way 😂😂 pic.twitter.com/WPJetLUDxP

Obviously, it could have been a lot worse. Gardner could have tripped or something super, super embarrassing like that.

But, with that being said, of course it happened to the Jets draft pick. Of course it did.