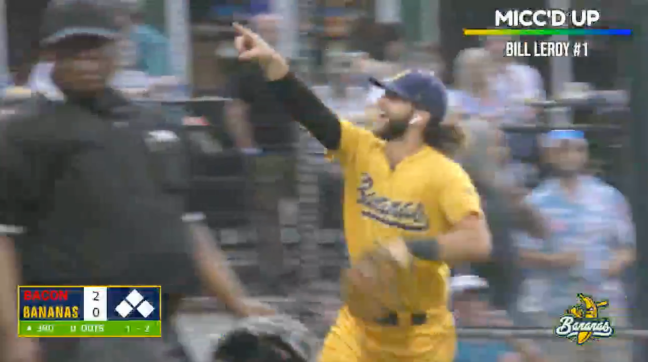 The Savannah Bananas continue to crank out incredible viral videos and each one is better than the last. That was the case over the weekend when the team’s third baseman called his shot on defense and made a ridiculous play while wearing a mic.

The Bananas, based out of Savannah, Ga., play in the Costal Plain League, a wood bat summer league for college players. They are famous for their hilarious promotions and in-game antics, which has helped them sell out every game since 2016.

Just last week, the team grabbed headlines for its Masters-themed walk-up before an at-bat. Today, it’s all about this wild defensive effort.

Third baseman Bill LeRoy was wearing a microphone during the top of the third inning. The Bananas were in the field and the Macon Bacon (another tremendous name) were at the plate.

As the first batter settled in for the 1-1 offering, LeRoy called his shot.

“Gonna roll it over, I’m gonna backhand it on the short hop, and Manny Machado underhand throw it to first,” LeRoy said to the guys in the booth.

Sure enough, the ball came screaming down the third base line, LeRoy barehanded it on the short hop and Manny Machado underhand threw it to first. It was exactly what he said was going to happen.

You literally cannot make this stuff up. @bleroy28 calls his own play while mic'd up with our broadcaster to make the out 🤯🤯🤯 pic.twitter.com/xrfEdJLQgT

“Look at this, bingo! Bingo! I literally just called that!” LeRoy said after the play. The broadcast team also went bonkers in the booth.

LeRoy needs to buy a lottery ticket because he can see the future and there is no other explanation. Insane.