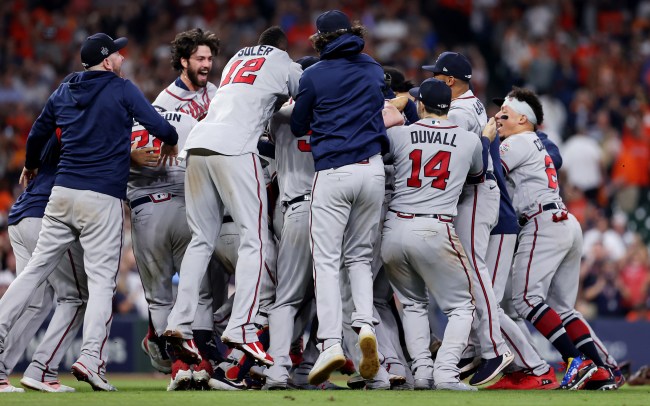 Through the first four months of the Major League Baseball season, the Atlanta Braves had been playing much of it without outfielders Ronald Acuna, Jr. and Marcell Ozuna, pitching aces Mike Soroka and Huascar Ynoa, and catcher Travis d’Arnaud.

By November 2nd, the Braves were somehow World Series champions.

And by somehow, we mean they went out and traded a bunch of draft picks and prospects to completely revamp their roster in time for the MLB playoffs.

On July 15, they traded for Joc Pederson. At the trade deadline, the Braves added Eddie Rosario, Adam Duvall and Jorge Soler.

From August through the end of the Major League Baseball season, the Braves went 36-20.

Rosario would be named the NLCS MVP, while Soler took home MVP honors in the World Series.

Not everyone was happy with how the Braves managed to turn things around, however.

“This is the Easter Bunny delivering rotten eggs,” said Boras, according to the Associated Press.

“Every team says, ‘I need to do this because it’s my only option, knowing I can’t reach a divisional crest, I can’t get in the playoffs.’”

Boras added, “We have seen the championship in 60 days. The rules allow them to be a less-than-.500 team at Aug. 1 and add four players, five players from teams that no longer wanted to compete, and for very little cost change the entirety of their team and season.

“And we saw this unfold to the detriment of teams that create at vast expense, planning and intellect and won over 100 games. In doing all this, we have now created an understanding that a fan would not know who the true team is until, frankly, the trading deadline.”

He’s certainly not wrong, but does it matter?

Again, not wrong. So why is it happening, and if it’s such a big problem, how can it be fixed?

Boras blames the collective bargaining agreement that expires on Dec. 1 and limits the amount of money teams are allowed to spend on signing draft picks. Why sign expensive free agents to contracts when a struggling team can just rebuild on the cheap with prospects like the Chicago Cubs and Houston Astros both did.

“It created an incentive for the race to the bottom,” said Boras, “because now we have half the Major League teams at some time during the season being non-competitive, trading off their players, making the game and the season very different than what it was intended to be, and that was having an incentive to win every game that you play.”

Boras also claimed that, as things now stand, only 17 MLB teams – at most, will try to compete for the World Series title during in 2022.

Reactions by fans and people involved the MLB world to what Scott Boras had to say about the current system were a mixed bag.

I just went through the list and came up with the same number myself. Really depends on how you classify Colorado and whether or not you believe Detroit and/or Texas are actually going to try. https://t.co/XTZnkKXwmd

This is probably the right count and I get it, but the Red Sox sold Mookie for parts, the Mariners just let Kyle Seager walk, I never know what the Angels are doing. They're not tanking but they're not trying very hard to win. https://t.co/qONm6g0afr

The trade-deadline allows contenders to address areas of need while allowing non-contenders to off-load players they expect to lose at season's end for valuable prospects.

Only Anthopolous saw the under .500 Braves as contenders.

Good for everyone except Big Money Boras.

I mean no one would like if the guy in last in their fantasy league traded his best players to the guy in the top 3, so I kinda understand his point, but it's also unfair to the players to be stuck on a losing team when a contender could use them

Way for those teams to compete is to tank and get the best prospects they can, and trade away their best players for prospects. Tanking is an issue. No doubt. But the existence and operating methods of Scott Boras are a big reason why tanking has become so popular.

The Giants added Bryant. White Sox got Kimbrel. The Yankees added Gallo and Rizzo. Dodgers added Turner and Scherzer. Brewers added Adames. Braves added a guy hitting .192, 2 guys hitting .230 or below, and a guy who was on the IL.

Scott Boras is why MLB is dying.