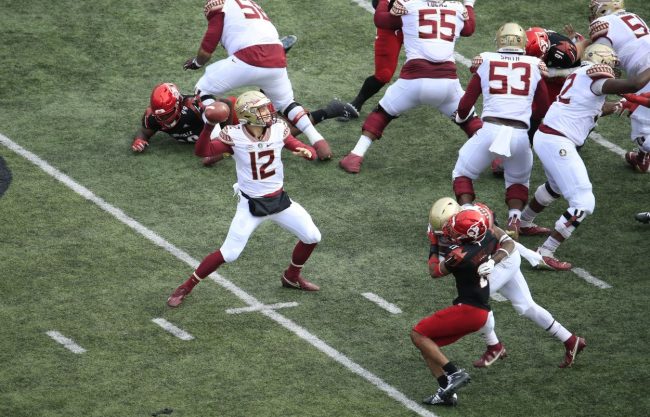 The allure of playing for former two-time National Championship-winning quarterback Scott Frost makes a lot of sense. However, for him to land two big-time quarterback transfers in less than a month as the head coach of Nebraska is quite confusing.

Earlier this month, former four-star recruit Casey Thompson transferred into the program after leaving Texas as the starter last season. Now, a week later, another big name is joining him.

Also a former four-star recruit, Chubba Purdy spent last season as a redshirt sophomore at Florida State. He didn’t see much time with the Seminoles and hit the transfer portal after the season. He announced on Monday that he will be joining the Cornhuskers.

Excited and Honored to be committed to The University of Nebraska! #GBR pic.twitter.com/1EViZJKY1K

This is not necessarily a knock on Nebraska, nor is it a knock on Frost.

Lincoln is not a bad place to go to college and the program has a deep-rooted history of success and passionate fans. Frost is a player’s coach whose guys want to play for him and has a track record of success at UCF.

But for him to land two four-star guys in a matter of 10 days is baffling. Purdy’s decision in particular doesn’t make sense, unless he truly believes that he can beat out Thompson for the starting job in 2022 or is willing to sit on the bench.

It appears to be the latter.

Thompson, who started every game for the Longhorns last season, finished with 2,113 yards passing and 24 touchdowns with nine interceptions. He also added 2.9 yards per carry on 55 attempts and four touchdowns on the ground.

The expectation is that he will start for Nebraska this coming fall. Thompson also has two years of eligibility remaining, so that could also be the case in 2023.

So where does that leave Purdy?

If he doesn’t beat Thompson in camp, he will be holding the clipboard. That could also be the case in 2023.

Because of COVID-19 and the redshirt, Purdy has four years of eligibility left. But does he really want to sit for the next two seasons?

To make things even more confusing, Nebraska does not have a recent track record of success. The idea of bringing the Cornhuskers back to relevance could be alluring.

But, over the last four years with Frost at the helm, Big Red has not won more than five games. Nebraska has gone a combined 15-29.

And the quarterback play has not been particularly impressive either.

Mind you, Martinez’s junior year was shortened due to COVID-19, but still. He was good enough, just not great.

For Purdy to transfer into Nebraska after the last four seasons, and after Thompson already signed his papers, is an interesting decision. Major credit to Frost.

Will Purdy or Thompson be the answer? Time will tell.