Scottie Pippen Refuses To Apologize To Charles Barkley For Calling Him ‘Fat’, Says He Isn’t Scared Of Fighting Barkley 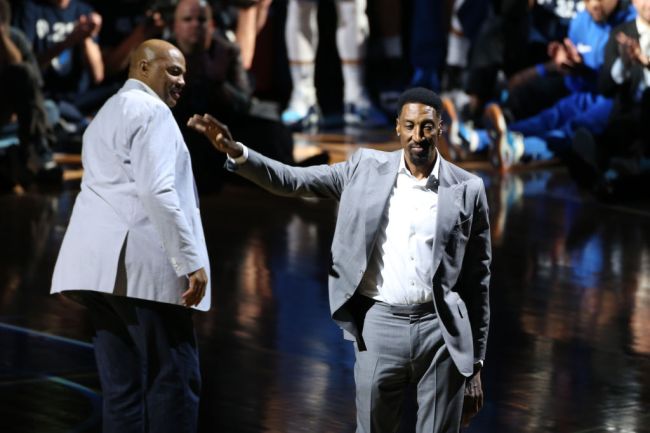 While speaking to GQ in a wide-ranging interview Pippen brought up why Charles Barkley’s career was diminished because he never won a championship.

Scottie had a lot to say about a lot of people, but a lot was about Charles Barkley https://t.co/5V4mp1CySn pic.twitter.com/DTwlqFA1kU

“You can sit here and argue that Charles Barkley was a great player. But he gets diminished why? Because he never won. He never was on a winning team. So when he sit up on that stage with Shaq and Kenny, they can diminish him at any moment. As great of a player as he is, they can make him the size of a period. Kenny Smith can make himself bigger than Charles Barkley on that stage because why? He won. Yeah, Charles in the Hall of Fame, but when you talk about success in winning, you don’t speak of Charles Barkley’s name. Until you put him on a great team like the Dream Team. That’s where he gets his lift at. Because he was a part of a team, he knows what it’s like to get to the top. Great individuals don’t tend to get there and they lose a little bit, they lack something. If you don’t feel what it’s like to win, then you’re left out”

Pippen was then asked about the time Barkley wanted him to apologize for calling him “fat.” Not only did Pippen refuse to apologize for his “fat” comment but he basically went on to call Barkley a fake tough guy who only fought “little white guys.’

Interesting you mentioned Charles Barkley, because he once said that he would “get arrested for murder” if you didn’t apologize to him for calling him “fat” after your breakup with the Rockets.

“I wish he woulda went through with it. I never apologized to him, but I’ll tell you what: He only got arrested for throwing some little white guys out of a window. I ain’t never seen him fight a Black man unless there were referees around. He plays his role like he’s tough. I don’t know nobody he done whooped. Go back and check his record. Did I apologize to him? I told him to get me the hell out of there. That’s what I recall.”

It might be time to put Pippen and Barkley inside the Octagon to settle their differences.