Screaming Pacers Fan ‘Karen’ From ‘The Last Dance’ Has Been Identified 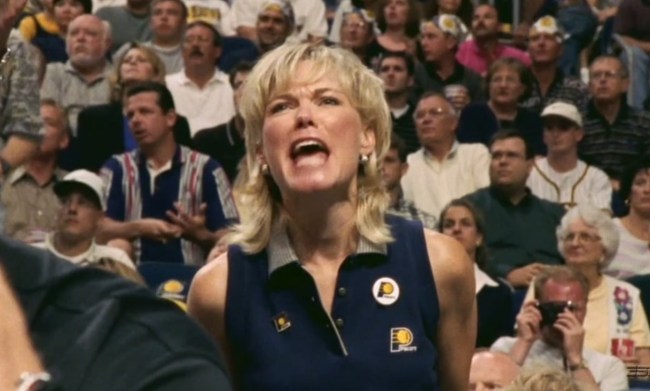 The star of episode 9 of “The Last Dance” was a screaming Pacers fan who was pretty passionate about her team during the 1998 eastern conference finals.

The fan was immediately dubbed “Karen the Pacer” and a new meme was born.

"I want to speak to your manager" Karen Indiana Pacers fan pic.twitter.com/I369yCKeji

Knicks have Spike.
Lakers have Jack.

But we have a Karen.pic.twitter.com/V3QST7Hm1h

At first, people believed Tracy Kornet, the mother of Bulls Luke Kornet was “Karen the Pacer” but a local Indiana news station actually tracked down the woman featured in the ‘The Last Dance” and she’s actually Kathy Martin Harris, a co-owner of a local car dealership.

She became a sensation overnight ‼️ I tracked down the "screaming #Pacers Fan" from 22 years ago who had social media buzzing last night during #TheLastDance. @WISH_TV pic.twitter.com/0zVPRajEmJ

Kathy Martin Harrison didn’t remember she had signed a waiver. After all, it was 22 years ago.

But after seeing herself on ESPN’s The Last Dance, her phone blew up and she became a viral meme, the light went on.

“Before the game started, a national TV guy came up to us and said, ‘Look, we’re filming a lot of footage of Michael Jordan for a movie,'” Harrison recalled in an appearance on Dan Dakich’s radio show Monday. “‘And if we show you in any of the footage, would you sign a release?’ We signed a release.”

Harrison, who owns a local car dealership and has been a Pacers season-ticket holder for 44 years, was talking trash to Michael Jordan and the Bulls, just as she did to everyone else at the time. It’s no longer allowed, thanks to the code of conduct, but she enjoyed the interactions with players — and some grew to recognize her, including Dennis Rodman.