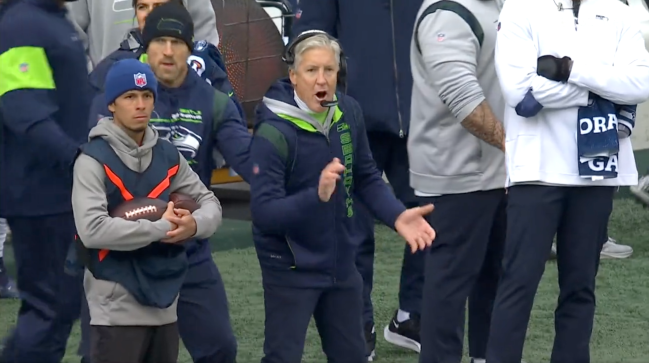 Pete Carroll is coaching like his job is on the line — which it very well might be. He dialed up a fake punt in the first quarter against San Francisco and it ended up resulting in six.

Reports have surfaced throughout the week that the 70-year-old head coach of the Seahawks might be on the hot seat. The Seahawks are in the middle of their worst season in a very long time and entered Sunday at 3-8 and in last place in the NFC West.

According to NFL Network insider Mike Garafolo, acting owner Jody Allen is not pleased with the team’s performance. She does not necessarily believe that this season is a one-year thing.

“Jody Allen…she’s very involved and she’s not happy. She’s not looking at this like ‘it’s a one-year thing, we’ve been successful for a decade.’” https://t.co/YAuaz5LOrL

As a result of the poor play, Allen might consider moving on from Carroll. There has been a lot of smoke surrounding the 11-year coach and Executive VP of Football Operations being on his way out.

In response to the rumors, Carroll is doing anything he can to win. On Seattle’s first possession against the 49ers, the offense quickly went three-and-out.

Set to punt on 4th-and-6 from the 27-yard-line, Carroll called a fake. Running back Travis Homer took the direct snap, broke to the left, and went 73 yards for the touchdown and the lead.

The @Seahawks pull off the 73-YARD FAKE PUNT TOUCHDOWN. #Seahawks

As Homer went streaking down the sideline, Carroll was beside himself. His risky first-quarter gamble paid off in a big way and it was exhilarating.

Pete Carroll had to be kept off the field during that trick play! 😂 pic.twitter.com/n6z9gJk70j

Should the Seahawks turn the 2021 season around, it would be as a result of lucky breaks and gutsy moves like this one. What a rush!