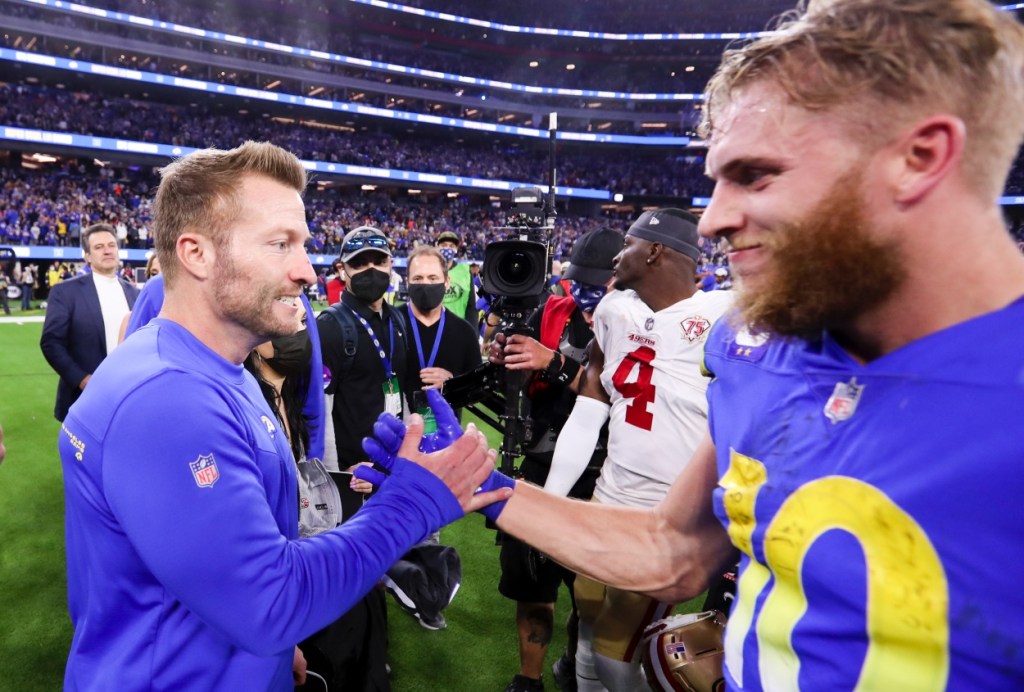 Super Bowl MVP Cooper Kupp was a guest on the ‘Dan Patrick Show’ where Dan teed him up with a question about vanity. Kupp was asked if he or Sean McVay care more about their looks and Cooper used the chance to roast his head coach a little.

After Cooper just won the Super Bowl MVP for the Rams he’s got A LOT more wiggle room to joke with and about his coaches about anything and everything. If he was a practice team player, Sean McVay might not tolerate getting roasted on a radio show but this is the MVP we’re talking about.

Here’s the clip from the Dan Patrick Show with the quotes below if you’d rather read than watch a video… It sure sounds like Sean McVay is that dude who holds everyone up on a bachelor party because he takes his sweet time getting ready only to walk out of the house looking the exact same every single time.

Dan Patrick: “Who cares more about how they look, Sean McVay or you?”

Cooper Kupp: “(laughs) Uhhh… who cares more? I think you gotta go with Sean. I think Sean cares a little bit more about how he looks.

I like to look good. He likes to look good. But in terms of who cares more, I can walk out the door with some shorts and a t-shirt. I think Sean takes a little more time in the morning.”

Dan Patrick: He might comb his hair at halftime, Cooper…

Cooper Kupp: Oh, he does. I’m sure he does. I know for a fact he’s gotta go in at halftime and the first thing he does is go look in the mirror like ‘is my hair still looking good?’ (He’s got) his secret pack of hair gel that he needs if anything’s out of place.

But yeah, I’m gonna go with Sean on that one. He might not agree.”

Dan Patrick: “You can say it now. You were Super Bowl MVP. You’re on scholarship the rest of your life there.”

There you have it. Sean McVay is that dude who holds everyone up getting ready… Yes, I know these are jokes and neither of them actually takes long to get ready. It’s just a funny question to ask the Super Bowl MVP about his coach, a question that has nothing to do with football and one that made Cooper Kupp come out of his shell a little.

It’s nice to see Cooper Kupp getting some more interviews and growing into his stardom a little after taking home the Super Bowl MVP. Hopefully, Sean McVay won’t make him run too many extra sprints for his DP comments.